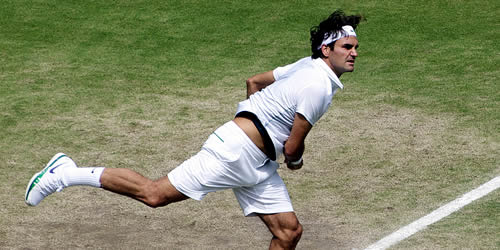 Go back barely a couple of years and the rivalry in men’s tennis seemed all about Roger Federer and Rafael Nadal.

They dominated the top two places in the rankings for the better part of seven years, until last spring. They shared 24 out of 28 Grand Slam titles until the start of last year. They had played one another 28 times, 10 of them in Majors.

But with the start of 2011, another man broke the stranglehold, won the Slams, took the top ranking. Novak Djokovic, so often the bridesmaid, stepped into the spotlight and did not looked back. The rivalry became one between the new top two, Djokovic and Nadal, a rivalry that leapt, in the space of the last 18 months, to 33 matches, courtesy of 10 finals.

Yet growing in tandem with the Serb/Spaniard rivalry was still that third man, nowhere near ready to acquiesce to the younger challengers.

The rivalry between Federer and Djokovic had itself grown to 26 matches, five of them last year and three of those in Grand Slam semis. On the hard courts of New York and Melbourne, Djokovic won and on the clay of Roland Garros it was Federer.

Now, in their 27th meeting, in a near-perfect alignment of targets, they would challenge one another on grass for the first time. And the outcome could, a year to the day after Djokovic took over as world No1, give the top ranking back to Federer for the first time in more than two years.

But while Federer had the edge in their head-to-head, 14-12, Djokovic had won six of the seven matches they had played since the beginning of 2011, and that included revenge at Roland Garros this year. Now the Serb sought to become the first player to retain the Wimbledon title since Federer in 2007, and stop Federer from becoming the first man to reach eight Wimbledon finals.

The atmosphere and the anticipation were razor sharp, then, and to add a further dimension, thunderstorms were on the way: The Centre Court roof would be closed from very start. Who, if any, would the slight slower, moister, stiller conditions favour?

The only clue to their different tactics lay elsewhere. While Djokovic won more of his baseline points, Federer played four times as many serve-and-volleys, winning the point 30 times, and he played and won 50 percent more net points.

That different showed in this confrontation, too. Federer went on the offensive straight away and, come the sixth game, he caught out Djokovic, who went tumbling in a vain attempt to reach a passing shot. It was a first break point and a netted backhand from the Serb gave the Swiss a 4-2 lead. A third ace later, it was 5-2, and with two 128 aces down the middle, a winning third serve and a couple of forehand winners, Federer took the set, 6-3, in 24 minutes.

The second set opened with a nervy double fault from Djokovic, but few would forget, least of all Federer, that he had led Djokovic by two sets and then held match points in the fifth set in the US Open, and he lost the match. Three extended rallies on Federer’s serve, guaranteed to favour Djokovic’s consistent baseline game, brought up 0-40 and his trademark backhand down the line drew one more error for an immediate break.

Now Djokovic took on the attack, serving big and rushing the net for a volley winner: He held to love and led 3-0. And he had Federer on the back foot on his next serve as well, rushing him down the forehand wing. Federer held from deuce but Djokovic now looked remarkably calm and confident and a forehand winner, reminiscent of the one that deprived Federer of match-point in New York, took the 5-2 lead with a flourish. Two more games and the laser-like speed and accuracy of Djokovic’s ground-strokes had ripped through the set in 30 minutes.

The tempo was high, as was the quality: more than twice the winners to errors from both and just two points separating them.

It felt as though the one to take control of the third set would take a vital advantage. Federer had a chance to make an early break in the second game, but a couple of tense return-of-serve errors ensured Djokovic held. But Federer turned on the aggression on serve, at the net and from the forehand, attempting to keep rallies short and in his favour.

In the fifth, Djokovic felt the full force of Federer again and a tense double fault brought up break point. The rally of the match, a full-blooded pounding baseline exchange of 23 shots, drew the first error from Federer.

Another rally of 26 shots, won by a Federer backhand down the line, gave the Swiss a second break point, but the Djokovic serve performed well again and he held, but it had taken him more than 10 minutes.

They both held strongly to 4-4 before it was Federer’s turn to face a break point. He held with three big serves, but both men now seemed at the peak of their powers, hitting hard, flat and accurately—the pressure switching from man to man.

They were poised at 77 points apiece when Djokovic thumped an overhead metres behind the baseline to offer up two break points, and now Federer’s aggressive tactics paid off. He rushed the net and then picked off a lob with a smash winner to take the set, 6-4.

Now Federer was going for the one-two strike on every point and a love hold took him to 4-1 and a 97-88 point lead.

Federer looked on the verge of making another break in the sixth as Djokovic pushed two backhands wide and Federer fired a forehand cross-court winner for 0-40, but Djokovic resisted and now the Swiss had to hold his nerve.

He had been here before, twice: serving for a place in Grand Slam final against Djokovic and conceding the break at the final hurdle. Clearly the nerves took a hold, and he missed four first serves in a row, then saw a Djokovic ball crawl over the net cord. Next Djokovic challenged a call and was proved right: They replayed the point. Then it was a Federer ball that survived a challenge. It could not have been more edgy, but the Swiss had match point and his first serve returned to make the decisive winner.

His face said it all, as did his opening comment: “I’m ecstatic!”

For what it’s worth—and when it comes to the final, his opponent should beware—he got better, more aggressive and more fluid as he saw the finish line. He made must one error in the fourth set, offered up no break points and served 12 aces in the match.

He afterwards talked of pressure: “Of course, there’s a lot on the line for me. I’m not denying that. I have a lot of pressure, as well. I’m looking forward to that. That’s what I work hard for.

“I’ve worked extremely hard since I lost that match point against Novak last year at the US Open. Now I have a chance at world No1, at the title again all at once.”

There are other records on the line as well, should he go on to match his hero, Pete Sampras’s seven Wimbledon titles. But both his final opponents have cause for hope against him. Tsonga beat him in the quarters here last year and Murray has won more matches than he has lost against Federer.

But that won’t stop the man aiming for the top being most people’s pick to win come Sunday.