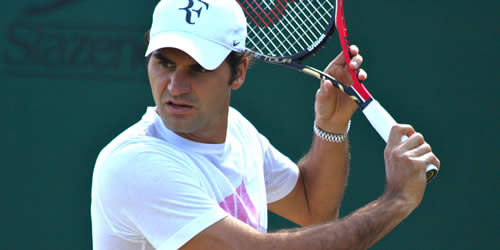 The first week at the All England Championships had been full of drama.

Former champion and one of the favourites for the men’s title, Rafael Nadal, lost in the second round to the world No100. Former finalist, No7 seed Tomas Berdych, also went quickly, as did former women’s No1 Caroline Wozniacki and the No5 seed Sam Stosur.

Novak Djokovic lost a set, Serena Williams had to find 23 aces to survive a third-round battle and Andy Murray was taken to a nail-biter of a four-setter—literally against the clock—by Marcos Baghdatis in the third straight night match to finish under the Centre Court roof.

In comparison, Week 2 seemed to get under way with a relative air of calm. The top four women were present and correct and Djokovic and Roger Federer had what looked like straightforward matches to ease them to the quarters.

Rain delayed the start of play, and when balls were finally struck, they were flying and skidding unpredictably in the gusting winds.

First, reigning Wimbledon champion, Petra Kvitova, went down a set to veteran Francesca Schiavone. Then Williams did the same against the 65-ranked Yaroslava Shvedova—owner of the golden set, a complete 24 points, in her defeat of French Open finalist Sara Errani.

One score after another flashed up on the scoreboard on Centre Court to growing sighs and whispers. Williams and Kvitova survived, but next came the shock of Maria Sharapova’s exit at the hands of the woman she beat here in last year’s semis, Sabine Lisicki.

After that came the loss of a Wimbledon favourite playing here for the last ever time, Kim Clijsters, in under 50 minutes. She won just two games against the growing force of new No8 Angelique Kerber.

But in truth, the Centre Court crowd did not need any of these results to keep them glued to their seats. Unfolding before their eyes was a drama of an altogether different kind. For Federer clearly felt he had not put the Wimbledon faithful through enough with his comeback from a two-set deficit against Julien Benneteau late into the Friday night gloaming.

His match against Xavier Malisse should have been no drama at all. Playing his second straight match against a player at least as old as himself—30—he held a 9-1 head-to-head advantage. Not since their first meeting, 12 years ago in Davis Cup, had Malisse beaten his long-standing friend—though in their only meeting on grass, at Wimbledon in 2001, the match had gone to five sets.

But Malisse, now ranked 75, had never hit the heights as Federer had, winning only three career titles to the Swiss man’s 74.

But that back-story looked irrelevant. In the early stages on a cold, damp, blustering Centre Court, Federer faced break points and it soon became clear why. At 4-3 up, he disappeared off court for a medical time-out for what was later revealed to be a back problem triggered at the start of the set.

Clearly stiff and not moving with his usual freedom, Federer managed to stay with Malisse—partly due to the levelling effect of the weather that made fine ball control near impossible—until 5-5. Then two mis-hits from the No3 seed contributed to a break and it looked as though all Malisse needed to do was open up his shoulders and fire some balls around the court.

But the brilliance of the Federer tactical game came to his rescue. With no power in his forehand, and struggling with his movement to the side, he kept the ball in play to a length and with exaggerated slice in a sequence of long backhand exchanges, awaiting either an error from Malisse or playing a delicate drop shot winner. At break point, he jumped on a return of serve and raced in to level the match with a drop shot to take it to a tie-break.

Throughout, Federer continued to hit measured ground strokes with little power but with acute spin. A combination of delicate winners from the Swiss racket and forced errors from the Belgian took the set, but not before Malisse slipped over and also sought the help of the trainer.

Now the rain took centre stage but, against expectation, the roof remained open while a persistent drizzle continued to fall. Federer afterwards put some of his back problem down to the conditions: “I guess it must be a mix of maybe the five-setter [on Friday] and the two days off and the cold wind today.

“Tough conditions: a lot of wind, cold, rain delay, I had the back thing going, so obviously it was hard to get any sort of rhythm.”

On their return to court, Federer, with the help of an extra layer under his shirt and some painkillers, but still using touch and placement rather than power and pace, broke in the third game and again in the fifth.

Counter to his usual game, he made the majority of winning plays from the backhand side, reaping plenty of rewards from both the cross-court slice and cross-court top-spin. With the court opened up, he ghosted in to make an angled drop shot or a conclusive volley. A final break in the seventh, and he had the set, 6-1.

Again, there was some concern over the drizzle and the roof, but they carried on. Now Malisse, changing his own tactics, upped the pace rather than trying to counter the Federer tactics. It brought an immediate reward, a break in the opening game, which the Belgian held to the end of the set, 6-4.

Again Federer disappeared from court, though not for a full time-out. On his return, Malisse hit out with the forehand for two straight winners and broke in the opening game. But come the third game, Federer made a couple of forehand strikes of his own—perhaps the first full-blooded, wrap-around swings since the opening set. The extra pace, combined with the accuracy that had got him thus far—he made just two errors in the closing set—gave him the break back.

On the dot of two hours, Federer broke again with a rare cross-court forehand winner. Now moving with a little more urgency and hitting with rather more confidence, he served out a drama-free final game for what, at one stage, had looked an impossible victory.

Much of his success was down to startling tactics—he won 34 of his 39 points at the net—and highly-focused accuracy—just 18 unforced errors in the match’s 228 points.

It took Federer not only to his 33rd Major quarter-final but to 850 match wins as he continued his bid for a record-equalling seventh Wimbledon title and a chance to reclaim the No1 ranking.

He quickly allayed concerns over the impact of his back problem on that campaign: “It’s way better than a few hours ago, so that’s pretty good.

“But honestly, I’m not too worried. I’ve had bad backs over the years. They go as quickly as they come. but of course I have to keep an eye on it now. I have one and a half days to work with. Two good nights’ sleep and I’ll be 100 percent by Wednesday.

“I’m pretty convinced, otherwise I wouldn’t have been able to pull out the match the way I did today.”

After the loss of so many popular faces at this year’s tournament, the All England Club will be pleased to hear that. They will also rejoice in the easy progress—under the roof, this time—of the No2 women’s seed Victoria Azarenka. She lost just two games to Ana Ivanovic, while the No3 seed, Agnieszka Radwanska, lost only five.

Both she and Azarenka have lost just 16 games apiece on their routes to the quarter-finals. The other places were won by Maria Kirilenko and the only remaining unseeded woman, Tamira Paszek.