After Roger Federer claimed his seventh Wimbledon title, Marianne Bevis looks back at 10 moments that stood out 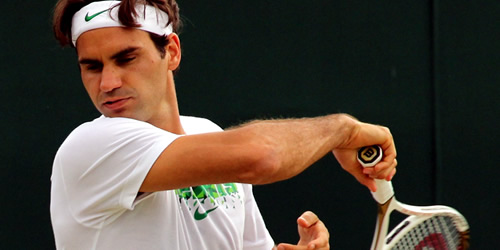 Iron Federer in a velvet glove

Against Albert Ramos, a not-half-bad No43 in the world, Federer made playing the opening match of Round 1 on the slick, untouched grass of Court 1 look the easiest thing in the world.

He dropped only three games in the 80-minute trouncing yet made 33 winners—compared with 10 errors—and chased into the net 34 times to average more than one front-of-court winner per game.

Against No68 Fabio Fognini, it was more of the same: six games dropped in even less time, 74 minutes, and with still greater disparity between winners and errors, 35 to eight.

Mikhail Youzhny may have detained Federer for an hour and half, but the No26 seed, a former No8, still only won five games in their quarterfinal and was fortunate it was no worse: Federer only converted six out of 20 break point chances. No wonder the Russian appealed to Andre Agassi in the Royal Box for advice.

First Wednesday, second match, and one of the few rain-free starts to the day. Federer’s habit is to have a gentle warm-up two to three hours before match time, and sure enough, scheduled to play at 1pm, he was gathering crowds at 10.30am. He happened, on this occasion, to be tuning up with fellow Swiss Stan Wawrinka: two of the best single-handed backhands for the price of one.

It was the usual steady-paced session that commentators quote as the antithesis of Rafael Nadal’s sweat-on-the-court pre-match workout. For the real thing, though, check into a Federer session on a non-match day.

The comparison is oft-repeated. While Nadal hits and runs and sweats his way through his long pre-match practice sessions—intense in action and in demeanour—Federer takes it easy, looks relaxed, apparently expending little.

The assertion is turned on its head on his off day between quarters and semis. Federer could be found hitting at full tilt, drilling first on his forehand, then on his backhand, against two opponents, pausing only to take on the odd comment from coach Paul Annacone. He also gave a taste of what it’s like to be a line-judge for those standing at the corner boundary of the court: a life-threatening location should one of his hitting partners not reach the ball.

Between the full-flowing, exhibition-style tennis of his three straight-set wins came challenges that showed Federer’s deep-seated desire to win, even when things are going less smoothly.

It so happened that fellow 30-year-old Julien Benneteau had some form against Federer. In their last meeting at the Paris Masters, he beat the Swiss in three sets after losing the first. So when the Swiss went two sets to love down in Wimbledon’s third round, alarm bells rang.

Federer may not have expected this against the No29 seed, but he had survived a similar situation against Juan Martin del Potro at Roland Garros the month before, and he would do it again here. His reaction to his predicament elicited one of the quotes of the tournament:

“Well, I was actually calm, to be quite honest…when I sat down, I said, alright, here we go now. Match has only just started…He’s still such a long a way from the finish line that there is no reason right now to go crazy. Let’s see how the third starts and then we’ll take it from there.”

The third went well, the fourth went 8-6 in a tie-breaker and Federer finally came through, but there had been fractions between them. Benneteau, though, hit the nail on the head: “Mentally he’s a rock.”

Fortitude of a different kind was required against his fourth-round opponent. Federer had not lost to Xavier Malisse since their first match 12 years before, but half way through the first set, Federer needed a medical time-out for only the second time in his career. His back, a recurring area of weakness, was hurting: cue another strength of the Federer game: tactics.

With no power in his forehand and struggling with his sideways movement, he used touch and placement rather than power and pace. He played sliced backhands, delicate drop shots, and rushed forward to finish rallies quickly at every opportunity. In fact, he lost just one of 26 net points in the concluding three sets. It was tennis full of craft and short on errors, with the extra fascination was seeing the cog-wheels kick into action in a problem-solving master-class.

Was it prescient, the design of shirt and shoes for this year’s Wimbledon? Perhaps it was simply cheeky, but the discrete piping on Federer’s Nike polo picked out the green and purple of the All England Club’s branding while the Nike ‘swoosh’ on bandana and shorts used the green. His shoes referenced both colours: a green edge and a purple swoosh on an otherwise white shoe, both upper and sole.

But then came another cheeky reference on the right heel, one used since Federer won his fifth Wimbledon title: a small gold cup containing the number six.

Revenge for Paris and New York

Federer’s meeting with Djokovic in the semis was their 27th but their first on grass. The outcome could, a year to the day after Djokovic took over as world No1, give the top ranking back to Federer for the first time in more than two years.

While Federer had the edge in their head-to-head, 14-12, Djokovic had won six of the seven matches they had played since the beginning of 2011, and that included Roland Garros this year. There was no question, then, that their semi here carried huge significance, not least because Federer failed to convert match points after leading by two sets in New York.

This time his aggressive game plan and concerted focus—he made only 10 errors in four sets, and just one in the final set—took the win. Federer admitted that this time he was “in a good place mentally,” and added:

“I’ve worked extremely hard since I lost that match point against Novak last year at the US Open. My run has been extremely good. Now I have the chance at world No1 and the title again.”

It comes from years of experience, of course, but there can be few questions Federer has not heard, and possibly none that he has not answered. But his straightforward responses have sometimes been translated as criticisms or mind games, so now he is often prone to adding an extra assertion.

One of his most interesting responses—finished with just such an assertion—concerned his relationship with Djokovic: “I thought that was more brought up by you guys…you like to put something between the top players. I was just upset at him calling the trainer out for no obvious reason against my buddy, Stan [Wawrinka], in a five-setter. That was it. We had a quick chat about it and things are cool since a long time between me and him. I’ve always respected him. [I’ve] had many meetings with him at the council. He’s been nice to work with. I have no issues with him, and I hope you believe me.”

The relationship between Federer and Andy Murray has also been presented as tense, but the gestures and words surrounding their final confrontation must surely now allay such suggestions. There were few who did not share Murray’s tears and few who were not touched by Federer’s paternal hug after the Scot’s efforts at a speech.

Federer had words of support for him off court, too: “It’s hard…I think he’s done so, so well. Because I see him every day. I see him, what he goes through on a daily basis on tour. At Wimbledon I think he handles it so perfectly, to be quite honest. I think he’s giving himself so many looks at big titles…I really do believe deep down in me he will win Grand Slams, not just one. I do wish him all the best. This is genuine…I really do believe and hope he’s going to win one soon.”

And talking of winning…

Who knows which was the sweetest? The seventh Wimbledon title? Reclaiming of the No1 ranking for the first time in more than two years and, inevitably next week, the record for most weeks at the top? The record-extending 17th Major, his first since January 2010, and won against a growing rumble of doubt about his chances over the longer Grand Slam format?

Add into the mix that Federer is one month short of his 31st birthday—the second-oldest man to reach No1 behind Andre Agassi—and a father of twins—“just to be able to juggle everything together has been a challenge”—and his achievements look better still.

No wonder this is one contented man who now happens to go to the Olympics as the top seed: “I’m so happy I’m at the age I am right now, because I had such a great run and I know there’s still more possible. You know, to enjoy it right now, it’s very different than when I was 20 or 25. I’m at a much more stable place in my life. I wouldn’t want anything to change.”