Wimbledon 2012: Sabine Lisicki can be a top player – Maria Sharapova 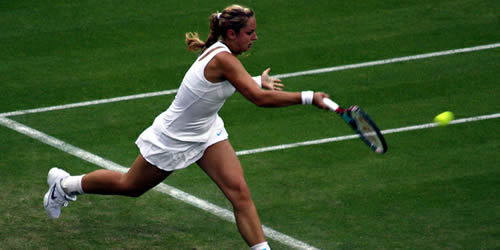 Maria Sharapova believes Sabine Lisicki has the potential to become a “top player” after the German caused an upset by beating the top seed 6-4 6-3 in the fourth round at Wimbledon.

The 25-year-old, who beat Lisicki in straight sets in the semi-finals at SW19 last year, failed to cope with her in-form opponent as the 15th seed wrapped up the first set in 45 minutes.

A rain delay broke Lisicki’s momentum at the start of the second set but it was her experienced Russian opponent who struggled to maintain focus, and the German pulled 5-2 ahead before showing great composure to serve out the match.

“Obviously she did really well here last year getting to the semi-finals. I haven’t really followed her results too much in the last year.

“If she plays at this level, of course she belongs at the top. If she serves as well as she did today and is as aggressive as she was, there’s no doubt she has a lot of potential.

“[But] it’s not just about one tournament – you have to do it for as many tournaments as you play or as much as you can obviously.”

Lisicki has now beaten the reigning French Open champion three times at Wimbledon – she beat Li Na last year and Svetlana Kuznetsova in 2009 before claiming the scalp of Sharapova – and the German made light of her impressive record.

“It feels amazing [to beat the top seed],” said Lisicki. “I mean, she won the French Open. Actually, that’s a good omen for me, because I’ve beaten the French Open champion three times here.

“In 2009 I beat Kuznetsova, last year Li Na, and this year Maria. I guess they shouldn’t be in my part of the draw.”