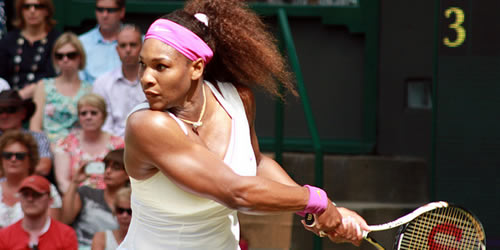 They were words to fill the heart with dread for any opponent of Serena Williams.

“I don’t play unless I feel like I can win. That’s why I play tennis. I’m not playing to come in last place.”

So spoke the four-time Wimbledon singles champion on the day before she faced a woman who had never played in Grand Slam final before, the world No3 Agnieszka Radwanska.

The first time Williams strode onto Centre Court to play a final was a decade ago, and she came away the winner. Now aged 30, and with a year out of tennis between 2010 and 2011 due first to injury and then a life-threatening illness, she was about to play her 18th Grand Slam final, more than any other active woman.

Then there was the small question of her doubles titles, four of them at Wimbledon. Her 2012 campaign with sister Venus may have given cause for concern as the rain affected day after day of the schedule. Her doubles matches concertinaed with her singles, yet she looked stronger and more threatening with every day.

Few other women could take out defending champion Petra Kvitova in straights in the quarters and then the Australian Open champion, Victoria Azarenka in similar style in the semis. Williams did, and she and sister Venus reached the finals of the doubles, too, taking out the No4 and No1 seeds along the way.

With two titles this year already, in Charleston and Madrid, Williams had made an impressive climb from a ranking of 25 at this time last year.

However, Radwanska, though a newcomer to a final at this level, was also enjoying her best ever form, with three titles and four more semi-final finishes. She was newly up to three in the world and gunning for No1 should she beat Williams.

The slight and popular Polish woman, still only 23, also had some pedigree on the grass. This was here seventh appearance at Wimbledon and she was twice a quarter-finalist—and won the junior title in 2005. Her success here came courtesy of a game suited to grass, full of guile, with an intelligent use of angles and spin, and a willingness both to volley and drop-shot.

But her quote ahead of this final was significantly less positive than Williams’: “I have been playing a lot of matches here in the rain and cold wind, and I haven’t been well for a few days. Of course, I will do everything in my power to perform well and win, but it’s not going to be easy.”

Her illness forced her out of press obligations when she lost her voice, and out of her doubles campaign—also with a sister, Urszula.

With everything weighed in the balance, then, Williams was a hot favourite, and after the first set, there was little to suggest that Radwanska would turn those expectations around.

Williams closed her opening service game with an ace and then turned her power on the Radwanska serve. It took her five deuces and three break points, a couple of chased down drop shots and a pair of cross-court forehands, but she finally drew a decisive error and held for a 3-0 lead.

The fourth game brought another break, and then another hold and it looked as though the set may become a total whitewash when Williams worked two more break point chances in the sixth. But Radwanska, admitting afterwards that she was “nervous in the beginning, just wanted it a bit too much”, found some accurate serving and her first ace to fend off Williams through three deuces for her first game.

The crowd roared their support and, although it was a matter of moments until Williams took the set 6-1, that single game was perhaps the confidence builder that Radwanska needed as the two women were forced off court for a rain delay. She had, after all, made only four errors in the set, in the face of 16 winners from Williams.

The Polish woman opened the second set more strongly, holding serve to 15. Still the barrage came from Williams, though: a serve-and-volley winner, two aces cranked up to 115 mph, and a backhand winner down the line.

Indeed the Williams backhand was proving highly destructive. In the third game, she made three straight backhand returns of serve to earn two immediate break points and she converted the first.

Radwanska took Williams to 30-30 with a glorious backhand of her own and then a delightful touch cross-court volley, but she could not make consistent headway against the American’s serving.

Radwanska was 1-3 down and looking at 0-30 but, her nerves evaporating in the sunshine, she began to ply her trademark tennis. She ghosted to the net for two put-away volleys, made a backhand cross-court winner and took the game with a clean serve.

Now there were signs that, as Radwanska played with more fluency and confidence, Williams made more errors and looked the more hesitant. Williams afterwards revealed that the normally calm multi-Grand-Slam champion became very nervous:

“I shouldn’t have been so anxious. She started playing excellent grass court tennis, getting a lot of balls back, and I panicked a little bit and I shouldn’t have. I usually don’t.”

Radwanska played a great drop shot, Williams hit a backhand wide, recovered with a 120 ace, only to give Radwanska a break point chance with another backhand error. The Polish woman did not need any encouragement: She leveled at 4-4 and crowd went wild with delight.

She began to lift the crowd still more with some reactive returns on her haunches and some accurate and incisive backhand whips. She held serve in the 11th with some fine service placement and, for the first time, the pressure was all on Williams.

Serving to save the set, the American netted an easy volley, double faulted and made two backhand errors. The set was Radwanska’s, 7-5, and the roar from the crowd said it all. They loved the variety, the resilience and the drama.

It was time for Williams to refocus, and she did just that. Radwanska had to fend off three deuces and a break point in the very first game of the third set and two more in the third. The Polish woman boldly continued to try and take the initiative, coming to the net to volley for a hold, but Williams, back to her calm best, stepped up to the service line in the fifth and made four straight aces. The only appropriate word was “intimidating” and at the third time of asking, in the fifth game, Radwanska was broken.

Still Williams piled on the pressure, taking Radwanska to 0-40 in the seventh. The Pole saved all three points only to offer up a fourth break chance, and Williams went 5-2 up.

She clenched her fist—one of the few signs that her emotions were ready to burst—and she served out the match in a little under two hours.

Those kinds of facts and figures serve to impress, as Williams always impresses. Another word that springs to mind is “formidable.” Yet faced with her fifth Wimbledon title, the fun-loving, emotional side of this woman rose to the fore and she climbed straight up to her box to embrace the family and friends who supported her through the hard times.

It was pointed out to her that she had matched Pete Sampras’s total of 14 Grand Slams—and incidentally her first since she won here two years ago:

“I really loved Pete when I was younger…I’m a little bit obsessed! I didn’t realise it was the same stats. Clearly my career is not over, so I definitely want to do a few more.”

And as if to hammer home the point, she went on: “It’s the beginning of a great phase. I feel amazing out there. This whole tournament I felt really great physically. So I think it’s definitely the beginning of something great. I hope it is.”

What odds, then, on a first singles gold here in a few weeks’ time? The Olympics beckon for the record-breaking Serena.