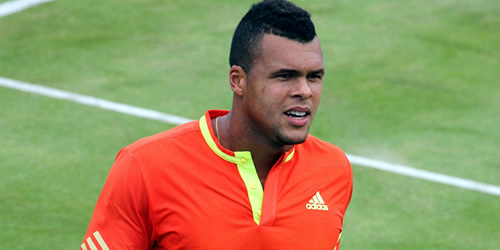 Jo-Wilfried Tsonga insisted he will not be fazed by facing home favourite Andy Murray in the Wimbledon semi-finals after the French No1 battled his way to a 7-6 (7-5) 4-6 7-6 (7-3) 6-2 victory over Philipp Kohlschreiber.

The 27-year-old won the first set in 47 minutes following a tense tiebreak, but his German opponent responded and raced into a 3-0 lead – and despite a valiant Tsonga effort to reverse the deficit, Kohlschreiber restored parity in the match.

The 27th seed was featuring in his first Grand Slam quarter-final, but he coped admirably with the pressure and frustrated Tsonga in the third set. However, the sixth seed persevered to win his second tiebreak of the match.

Tsonga increased his intensity and leading at 5-2, Kohlschreiber’s unforced error gave the Frenchman his first match point – and he duly dispatched to set up a last-four meeting with Murray.

“That’s alright [to face the home favourite],” said Tsonga. “Sometimes I play against a player who has a lot of support and I win. At the US Open [in 2011], I played against [Mardy] Fish in a tight match. It was not easy, but I won it.

“It is of course an advantage to play at home, but it’s still tennis, and you never know what can happen on court.”

Tsonga is one of four French players ranked within the world’s top 20 – Richard Gasquet (20), Gael Monfils (16), and Giles Simon (13) – and the 2008 Australian Open runner-up admits the quartet can relate to the pressure Murray feels when playing in front of a partisan crowd at Roland Garros.

But Tsonga believes it is more difficult for his semi-final opponent as the only British player with a realistic chance of winning at the All England Club.

“I think here for Andy it is difficult because he’s alone,” added Tsonga.

“In France it’s OK because we have many players and that’s fine, but here for him, it’s really difficult because all eyes are on him and it’s tough.”

Tsonga’s only Grand Slam final appearance came at the Australian Open four years ago when he lost to Novak Djokovic, after he beat Murray in four sets in the first round en route to the showpiece.

Murray has won every meeting between the pair since, including the Aegon Championships final in 2011 – and although Tsonga admits the Scot will be favourite in current form, he is convinced there is a chance of an upset.

“Andy is one of the players I don’t like to play because he’s returning really well and he can play really good passing shots. He’s really quick and all the time on the ball, so it will be tough for me,” he said.

“But I beat him once and the last time we played together on grass, I had a match point and it was really close in the final at Queen’s last year. I will have a chance.”