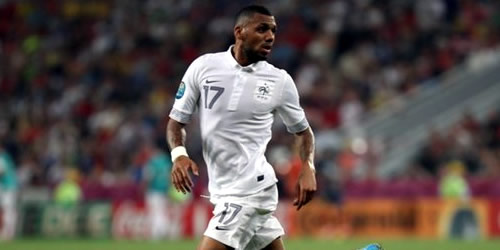 Yann M’Vila has been touted as a transfer target for Arsenal Photo: Football.ua, via Wikimedia

Yann M’Vila insists he is happy to stay at Rennes for another season, despite reported interest from Arsenal.

The France international has been heavily linked with a move to north London this summer, with Tottenham Hotspur also touted as a possible destination for the 22-year-old.

The midfielder admits he remains open to a move away from Rennes but would also have no problem staying at the Ligue 1 club.

“I must play good matches. While I am here, I am at the disposal of the coach and I must do the best possible.

“The transfer window ends on 4 September, so I will not lose my head.

“If I must stay another year or more, I will stay. If I must go, that’s life. But if I stay here, I will be 100 per cent concentrated.”

“He needs to come to the Premier League,” said Desailly. “We want him in this competition because it’s the best and he can really develop his skills.

“He likes to play with tempo. You can see the way he gets the ball and passes straight away: long ball or short ball. He has that reading which is needed in the Premier League.

“If I was a chairman of a club, I would just close my eyes and put the figure on the cheque to get him because he’s really the future if you develop him.

“I would really like to tell him, first of all, like a defender, what is your mission? It’s to defend.

“If you defend very well, anything extra that you do is fine. But first of all concentrate on defending very well and passing the ball quickly to the attackers.

“Once he will have understood that you will see he is the best midfielder – better even than Patrick Vieira.”

Lukas Podolski: I’ve felt at home at Arsenal from day one