Australian cricket is set for a revival, says Dirk Nannes

England should enjoy their victories over Australia while they last, says Dirk Nannes in his column in All Out Cricket magazine 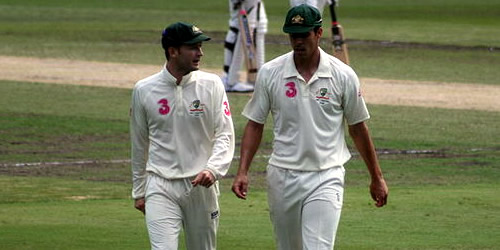 Australia were recently beaten by England in the ODI series Photo: PrivateMusings, via Wikimedia

Australian cricket has dropped from its mantle of domination during the last decade and now finds itself in unfamiliar territory.

But the picture is not as dark as their rain-plagued drubbing in the recent ODI series against England would suggest.

A lot has changed for Australia in the last 12 months, both on and off the pitch. There’s a new captain, an all-new selection panel, a fresh-faced Australian team that until the recent UK tour has been competing well, and a revamped domestic Twenty20 league that is bringing thousands of new recruits to the game. The image of cricket in Australia has been given a facelift, and time will tell if it works.

I like Michael Clarke as a Test captain. Fourteen Tests, nine wins, three draws and two losses is a good start to any captaincy career, but the manner in which he has done it has been even more impressive. He is aggressive and fearless, always going for the win. Rather than be burdened by captaincy, his batting has improved, averaging almost 59 since taking over from Ricky Ponting. Like many people across Australia, I was not convinced at first whether Clarke would be a great leader, but he seems to be proving me wrong.

He has been assisted by more reasoned decisions around the selection table. A few years ago, Australian selection seemed to be based on fads and whims. Take the rotation of spinners since Warne (11 of them in all) and the axing of Simon Katich at the peak of his powers as examples. Katich was the leading run-scorer in 2010-11, but was flicked when selectors were copping heat in the Australian media about the team being “too old”. Selectors now seem to be picking players on form, character and team balance rather than age, media reports or poor one-off performances. The trouble at the moment is who to pick.

There’s always up-and-coming talent in the Australian system, but seemingly gone are the days of talent gluttony, when the likes of Brad Hodge, Martin Love, Matthew Elliott and the rest were pumping out thousands of domestic runs yet not getting a look-in at Test level. No one of late has made those runs and banged down the selectors’ door demanding selection, and there’s been a lot of navel gazing in the offices of Cricket Australia as a result.

The selectors seem to recognise the problem, and have been willing to give young players a chance. Cricket Australia has undergone an intensive review of its operations and is making changes to improve the top end players. Given time, the bowling stocks are looking strong, but the current problems lie in the batting.

Australia are lacking battle-hardened batsmen who know their games inside out. I’m talking the seven-plus year first-class players who have played the toughest cricket around. A lot of the guys being picked lately have deserved their place as they were the best available, but some have not played enough top-class cricket to understand their whole game under all conditions.

Take Phil Hughes as a classic example. He simply had to be picked in 2009 because he made 1,000 runs averaging 75. But at the same time, he was 20 years old and was only used to Australian conditions. There was no one else with experience making any runs, so he was the stand out choice. On the flip side there is Mike Hussey. He was a seasoned pro by the time he made his Test debut aged 30. You simply can’t replace experience like that.

Moving forward, the long-term youth prospects are looking good. Last year there were over half-a-million kids playing at local clubs and schools across the country. The revamped Big Bash League was a huge success, with record crowds at many grounds, including sell-outs in Adelaide, Perth and Hobart. This volume of audience is bound to increase participation rates and, in turn, the talent pool available.

With England holding the Ashes, and Australia’s horror month here in the ODIs, English cricket still can’t rest on its laurels. There will be more Pontings, Husseys, McGraths and Warnes to come… you might just have to wait a few years.

Australia might be down, but write off the convicts at your peril!