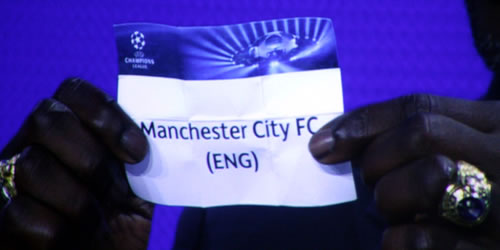 Manchester City face a tough ask in getting out of Group D Photo: The Sport Review

The Citizens were handed a tough draw in Monaco, with Roberto Mancini’s side also set to take on Dutch champions Ajax and Bundesliga winners Borussia Dortmund in Group D.

Chelsea will meet Serie A champions Juventus in Group E as the Blues look to defend their European crown, with Roberto Di Matteo’s side also braced for demanding trips to Shakhtar Donetsk and Danish side Nordsjælland.

City’s derby rivals Manchester United were given a seemingly more straightforward draw, with Braga, who knocked Liverpool out of the Europa League in 2011, likely to offer the biggest challenge for top spot in Group H.

The Red Devils can expect a vociferous welcome at the Turk Telecom Arena where they will take on Turkish champions Galatasaray, with Romanian outfit Cluj completing Group H.

Arsenal striker Olivier Giroud can look forward to an emotional return to his former employers Montpellier in what could prove a tricky group for Arsene Wenger’s side.

The Gunners will take on Schalke, fronted by attacking duo Klass-Jan Hunterlaar and Peru striker Jefferson Farfar, while also facing on Olympiacos for the second successive season in Europe.

Scottish champions Celtic were rewarded for finally ending their four-year wait to qualify for the Champions League group stage with a mouth-watering trip to Camp Nou.

Neil Lennon’s side will come up against a familiar opponent in Spartak Moscow’s Aiden McGeady – the winger spent six years at Parkhead – with Portugal’s Benfica completing Group G.