Ricardo Carvalho is set to join QPR on loan from Real Madrid, with Hoops fans pleased with their new-look defence on Twitter 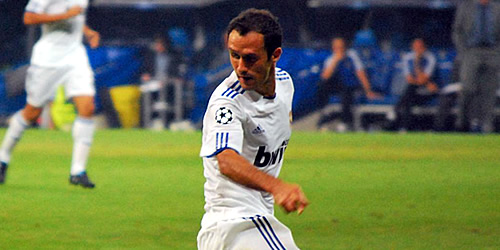 Ricardo Carvalho is expected to agree personal terms with QPR in the next 48 hours A Ramos, via Flickr

Queens Park Rangers and Real Madrid have agreed a deal that could see Ricardo Carvalho move to Loftus Road on a season-long loan as Mark Hughes continues to strengthen his defence after a heavy 5-0 defeat by Swansea City last Saturday.

The 34-year-old former Chelsea defender, who has yet to agree personal terms, looks set to be joined at Loftus Road by Tottenham’s Michael Dawson, prompting the club’s fans to dream of a top centre-half pairing on Twitter.

Tyler Chambers (‏@TylerChambers_) reckons QPR will now have a good back four: “They have the potential to have a HALF decent defence in Boswinga, Carvalho, Dawson & Taiwo!”

QPR fan Boysie Wise (‏@boysiewise11) does not rate Carvalho – but is excited about Dawson arriving: “Not buzzing about Carvalho at all!! Dawson yes I am!! But not Carvalho! Don’t ask why – I just don’t think it’s a good move!!”

Dickie (‏@akadickie) disagrees: “Carvalho to QPR? He’d be a great signing for them – always thought he was excellent at Chelsea. Twice the player of Terry.”

Craig Barber (‏@CraigBarber1991) notices a growing trend at Loftus Road: “QPR may as well call themselves Chelsea XI. Wright-Phillips, Bosingwa and now Carvalho on loan. Who next? Marcel Desailly out of retirement?”

Adam Sands (@AdamSandsQPR) can’t understand why some people have reservations: “We’ve gone from Fitz Hall to Ricardo Carvalho and some are moaning, unbelievable.”

Cathal Mac! ‏(@Cathal_Mac) can’t see Carvalho and Dawson doing much to help QPR: “QPR get hammered 5-0 and now get Dawson and Carvalho, really isn’t going to change much!”

FMScout_480 (‏@FMScout480) is in agreement: “I don’t think Ricardo Carvalho alone will solve the defensive frailties seen in the 5-0 loss. QPR’s wage budget must be huge.”

And Jarred Acton ‏(@JazzaActon26) believes Carvalho was a key player for Chelsea: “Ricardo Carvalho was actually quality at Chelsea, when he wasn’t playing, Chelsea were no way near as good!”

Finally, QPR fan Alex Furlong ‏(@AlexFurlongDc) hopes the new centre-half pairing can ensure the club’s survival: “If we sign Dawson and Carvalho that would hopefully see us safe. We definitely need a better defence #QPR!”