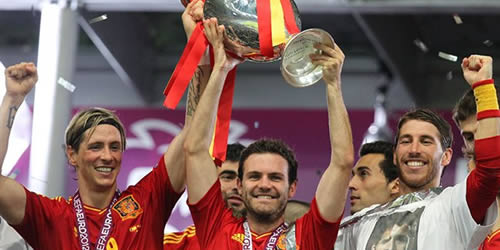 The 28-year-old enjoyed a positive end to the season as he helped Chelsea win the Champions League title and scored three goals as Spain retained their European championship crown.

Drogba opted to leave the Blues and join Chinese side Shanghai Shenhua at the end of last season, leaving Torres and Daniel Sturridge as Chelsea’s only recognised strikers.

The former Atletico Madrid captain has struggled since completing a £50m move from Liverpool to Chelsea in January 2011 – but Di Matteo maintained Torres’ overall contribution to the side was more important than his goals.

“I don’t want to put pressure on one player,” said Di Matteo. “We operate as a team and everybody needs to serve the team. Before, with Didier, I don’t think it was just an individual effort.

“Hopefully now, our strikers will score lots of goals. But he’s not the only one. We’ve got other strikers and attacking midfielders that can score goals.

“The price comes from the fact that he’s been superb over the years for the teams that he’s played, for Liverpool and Spain, and so on.

“I was very happy with him at the end of last season. I have great expectations on the club and the team and he’s part of it.

“He was brought in to be a fantastic striker and, hopefully, he will be able to fit into our team and show the qualities that he has, like everybody else.”

Chelsea boss Di Matteo is hoping Torres’ success with Spain at Euro 2012 will give the striker a boost ahead of the new Premier League campaign.

“He’s won a lot of trophies last season, so he’s full of confidence and he’s only been back not long but he’s been looking good in training,” he added.

“But, for me, if my right-back scores, or the left-back, or the central midfield player scores, it doesn’t really matter.”

Lucas Leiva: Sami Hyypia was a role model for me at Liverpool