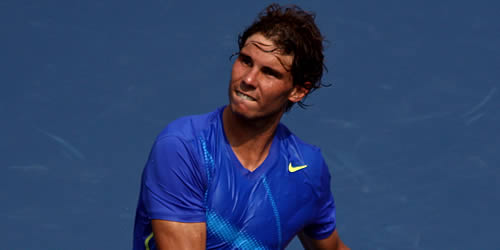 World No3 Rafael Nadal has announced that he is unable to play at the last Grand Slam of the year, the US Open.

The statement, which he made to his fans on Facebook and Twitter, said simply: “I am very sad to announce that I am still not ready to play and have to withdraw from this year’s US Open in NYC.

“I am sorry since I always found great crowds and great support, but I have to continue with my recuperation and preparation to be ready to play in the right conditions.”

The news was soon after confirmed by the US Open Tournament Director, David Brewer: “Rafa has informed us that he will not be ready to compete at the US Open this year and has withdrawn from the tournament.”

Though not explicit in the announcement, Nadal’s withdrawal has been put down to his continuing battle with the knee tendonitis that recurred after his shock second-round defeat at Wimbledon at the end of June.

Nadal showed no obvious signs of injury in his three-and-a-half-hour loss to Lukas Rosol, but he afterwards talked of needing rest—and he came into the grass season on the back of an intense clay run that saw him win four titles from five tournaments, a 24-1 win-loss record, culminating in the French Open.

When Nadal subsequently pulled out of a fund-raising exhibition against Novak Djokovic in Madrid, he cited knee problems: “Doctors have been checking my knee, and I suffer a tendonitis which will have me away from any practice or matches for 15 days…I was with my doctors on Monday and started already my treatment with the goal to be ready for the London Olympic Games and represent Spain once again.”

But the seriousness of the injury soon became apparent when he also withdrew from the Olympics, saying “I do not find myself in a condition to compete.” Not only was he the defending gold-medallist but he was due to carry Spain’s flag at the opening ceremony.

With few points to defend in the two North American Masters tournaments that form the build-up to the US Open, Nadal’s withdrawal from the Rogers Cup in Toronto and this week’s Cincinnati Masters was not wholly unexpected. However, his decision to miss the US Open, where he was the losing finalist last year and champion the year before, is more significant.

It marks the first time Nadal has missed a Grand Slam event since he withdrew from Wimbledon in 2009, also with tendonitis, and even if he returns to play the Asian swing in October, this will be his longest absence from the tour since he missed three months with a stress fracture in his ankle in 2004.

The loss of Nadal from the US Open draw is likely to have an impact on the rankings. The Spaniard currently leads No4 Andy Murray by fewer than 700 points, and in forfeiting Cincinnati and the US Open, he will automatically concede 1,380 points.

Although Murray is defending champion in Cincinnati—and as things stand he is likely to face first No2 Djokovic and then No1 Federer to retain that title—he will hope to improve on his semi-final finish when he plays his favourite Grand Slam in New York. Indeed, he now has a 50-50 chance of avoiding either man ranked above him until the final.

So what has become a sorry season for Nadal could end up improving the prospects of the man who took over his place on the gold-medal podium, Murray himself, at this year’s Olympics.

But while it’s an ill wind that blows nobody any good, this is certainly not how Murray would have chosen to enhance his prospects for the US Open title.