On the anniversary of Helen Wills' seventh US Open singles triumph, Marianne Bevis looks back at her decorated career 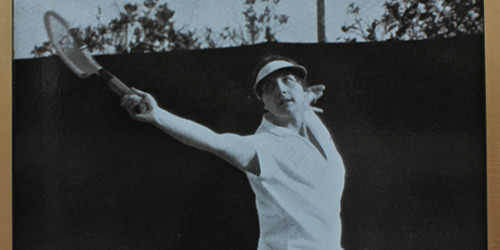 While the little known Molla Mallory holds the record for the most US Open singles titles—eight—it was the remarkable Helen Wills Moody who, at the age of just 17, relieved Mallory of her US crown in 1923.

Wills went on to hold the record of 19 singles Grand Slam titles for a third of a century.

All the signs suggested that Helen Wills would make a success of her life. She graduated from one of California’s top schools and won an academic scholarship to study fine arts at the University of California.

She went on to be honoured as a Phi Beta Kappa—one of the most prestigious liberal arts and sciences awards in the United States—and was a highly accomplished painter, a successful writer, and an excellent horsewoman. She rubbed shoulders with kings and prime ministers, was painted by Diego Rivera, and was admired by Charlie Chaplin.

But the early signs did not suggest a career as one of the 20th century’s most successful sportswomen, for she was a small and relatively fragile girl. Her father, though, was a doctor, and he got his daughter interested in outdoor activities, particularly swimming and riding. When she was eight, he bought her a tennis racket and played with her every day.

Her physical health improved rapidly and, at just turned 14, she was invited to join Berkeley Tennis Club. Soon, her trademark concentration, power, and speed came to the fore, and she began competing on the national circuits.

In 1921, at just 16, and still only 5ft tall, she went to the east coast for more competition, and saw the most famous tennis player of the day, Suzanne Lenglen, for the first time.

The sick Lenglen was jeered off court by the American crowd, having defaulted against home favourite Mallory. The very next year, Wills was herself up against Mallory in the US National final, and recorded her last ever loss to her illustrious countrywoman.

Wills drew much emotional support from her mother. The teenager was a quiet and reserved girl who admitted in later years that she found relief from an innate melancholy in her painting and her tennis. The presence of her mother provided both mental strength and friendship.

By the end of 1922, Wills was ranked third among American women. More importantly, she had grown a full seven inches and gained 25 pounds. She was ready to embark on one of the finest decades of tennis success ever achieved by a man or a woman.

Wills won her first Grand Slam title at age 17 and her last at age 32. Between 1923 and 1933, she won 17 of her 19 singles Slam titles and was runner up in two more—and this was at a time when players did not take in the Australian championships because of the time and distances involved in reaching them.

She also won gold in both the singles and doubles at the Paris Olympics, and she held the No1 world ranking throughout, except for 1926. Perhaps most remarkable of all, she achieved a 180-match winning streak between 1927 and 1933, without losing a set.

That gap in 1926 was significant in more ways than one. It marked an absence from her CV of all three Majors because she needed an emergency appendectomy during the French championships. That surgery was to deprive tennis of one of the most fascinating head-to-heads of the century.

Wills and Lenglen dominated the inter-war years, between them winning 30 Grand Slam titles between 1919 and 1938. Yet they played each other only once, and it was not in one of those majors. Billed as “the match of the century”, it took place in Cannes in February 1926.

Wills made her way to France that year to pursue her painting and her education, but she also took up the Lenglen challenge. The media went into overdrive at the prospect of Lenglen, the best female player in the world, asserting her superiority over the 20-year-old who had already won three US titles.

Lenglen was the favourite to win, and she did. But it was a closely fought battle that flagged up to the tennis world that Wills was ripe to take over Lenglen’s crown. But before the rivalry could get under way, Wills lost her appendix, Lenglen turned professional, and the two never met again.

Wills, though, did meet another significant person again after Cannes. A young businessman in the crowd, Frederick Moody, introduced himself after the match, and Wills became Wills Moody in 1929.

By her return to tennis in 1927, Wills was unbeatable. Not only did she win all three Slams between Wimbledon that year and Wimbledon in 1930, she did so without conceding a set.

She routinely practised her tennis against men, which helped to develop the powerful, athletic and unflagging play that dominated all-comers. Indeed as late as 1933, she played, and beat in straight sets, the eighth ranked American male player Phil Neer in an exhibition match.

Time magazine, which featured Wills Moody on its cover twice, said: “There was nothing frivolous about Little Miss Poker Face. She stood her ground like a tank, drilling out bullet serves and powerful baseline drives.”

Her apparent lack of emotion on court, to which this extract refers, was interpreted by many as an aloof coolness, and neither endeared her to the media nor won great warmth from spectators. It reflected, rather, Wills Moody’s naturally introspective personality, as well as her ability to channel herself with remarkable concentration into her tennis. In her autobiography, she said: “I had one thought and that was to put the ball across the net. I was simply myself, too deeply concentrated on the game for any extraneous thought.”

Hazel Hotchkiss Wightman, a former American champion and the woman behind the Wightman Cup, had reason to understand Wills Moody better than most. She, too, had taken up tennis to improve her health, and also went to the University of California: “Helen was really an unconfident and awkward girl…I thought of Helen as an honestly shy person who was bewildered by how difficult it was to please most people.”

Some of Wills Moody’s fellow American players were less than enamoured by her. Helen Jacobs—and some of the American crowd—resented her retirement with back pain from the 1933 US Open final. Wills Moody needed a year out of tennis to recuperate from the injury, and she refused ever to play in the US Open again.

She did, however, win Wimbledon in 1935 and, after another three years away from tennis with back problems, in 1938. Both wins were against Jacobs. They were also her valediction to tennis.

There are many photos of the reclusive champion, and even a little blurry film footage. Both media reveal a beautiful, elegant, glowing woman. Her features, like her figure, were classically proportioned. Helen Wills Moody displayed grace, beauty and glamour both on and off the tennis court. Indeed, Charlie Chaplin is quoted as saying that the movement of Wills playing tennis was the most beautiful sight he had ever seen.

In style, too, she had class. Not for her the bohemian bandanna and flowing coat sported by Lenglen. Wills Moody wore a pleated knee-length skirt, white open neck blouse, and a white visor—a trend-setter of her day.

In retirement, Wills Moody set up her own art studio, wrote extensively, and played tennis into her 80s. She continued to follow the game and admired the tennis of Martina Navratilova—as well she might. It had taken more than half a century for a woman to win more Wimbledon singles titles than the multi-layered Wills Moody, and Navratilova was that woman.

What more might burnish the Wills Moody reputation? That she reached the final of every Grand Slam singles event she played during her career? That she played in the Whiteman Cup 10 times and lost only two matches? That she won 12 Grand Slam doubles titles? That she wrote and illustrated her own coaching manual?

Or that, when she died at 92, she left her $10 million fortune to the University of California, where she is now remembered by the Helen Wills Neuroscience Institute?

In truth, there are few either before or since who have left such a complete legacy.