“People often remind me that I’m Olympic champion, but being honest, it still doesn’t feel like I am and I don’t know if it ever will" 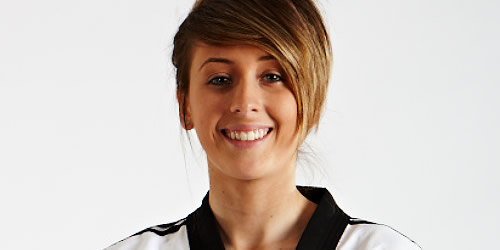 As a monumental summer for British sport draws to a close with the conclusion of London 2012, it leaves behind a litany of memories and moments that puts the Games down in the annals of history as arguably the greatest to date.

The gold rush that was ‘Super Saturday’ – the night of Jessica Ennis, Mo Farah and Greg Rutherford – will live long in the memory for so many as one of the great sporting moments for Great Britain.

Over the course of two weeks, competitors already well known cemented their statuses as icons, while others not so previously renowned emerged as household names in a nation gripped by Olympic fever.

But perhaps one of the most impressive British achievements of London 2012 belonged to Jade Jones, the tenacious 19-year-old taekwondo 57kgs gold medal winner.

It has now been just over two weeks since the teenager from Flint in North Wales, nicknamed ‘the headhunter’ for her tendency to aim for opponent’s heads, was crowned Olympic champion.

And Jones admits becoming the country’s first taekwondo Olympic champion and the face of the sport in Britain for the next generation at such a tender age, is something she still struggles to get used to.

“People often like to remind me that I’m Olympic champion, but being totally honest, it still doesn’t feel like I am, and I don’t know if it ever will,” she says.

“It’s something I still find myself coming to terms with everyday and right now I’m just enjoying every moment of it.”

And why wouldn’t she? The girl who took up taekwondo as a shy eight-year-old after encouragement from her granddad Martin now finds herself at the forefront of the bright new dawn awaiting British sport after the stunning win in London.

Setting out with a dominant 15-1 preliminary-round win over Serbia’s Dragana Gladović and followed up with a convincing defeat of Japan’s Mayu Hamada 13-3 in the quarter-finals, it was the semi-final clash with Chinese Taipei’s Tseng Li-Cheng that provided Jade’s biggest test to date.

In a performance she believes to have been her best of the Games against the world No1, Jade battled to win 10-6 to get to the final and ultimately seal gold.

But such a remarkable journey is underpinned by Jones’ grounded and modest nature.

Always looking to improve, she is the product of humble yet tight-knit surroundings, always being able to count on the support given by those around her.

It was Martin who drove his granddaughter on the 100-mile round trip to Manchester for training, sometimes up to four-times-a-week. On Sundays, they would often find themselves going south for the long trek to Cardiff for competitions.

When Jade didn’t have the money to compete at the inaugural 2010 Youth Olympics in Singapore, it was through the fundraising efforts of local Flint businesses that the required £1,600 was raised.

She went on to win gold, not just justifying the faith of the community, but using the stepping stone to set her on course for Olympic success.

And it’s fair to say that since those eventful two weeks in London, life for Jade – like many British athletes – has changed significantly.

Dizzee Rascal is a fan and requested a photo. Jaguar sent a new car round. The public approach her in the street to pass on their congratulations. And just last week, Jones and mother Jayne were in the pages of Hello! magazine for a photo shoot. Such dramatic changes are not lost on the teenager, who remarkably, won’t turn 20 until next March.

“It still hasn’t really sunk in yet,” she says. “At the end of the day I grew up in a council house, so this all very new to me. I didn’t expect to have all these things chucked at me, but it is mad in a nice way.”

But with new found fame, fortune and expectation, Jones hopes the biggest outcome of such a meteoric rise will be an increase in participation for her sport from young people, with the added bonus of more females taking up the sport.

“The best thing has been people approaching me in the street now knowing what it is I do and exactly how taekwondo works. Beforehand I had to explain to them what it was I actually did!”

She adds: “People have come up to me in the street and said their kids have started doing taekwondo so a lot of people seem to be getting involved already and that’s really nice.

“Hopefully it can only get bigger and better from now on and everything can go to a new level.”

When asked if the Olympics could help to inspire young people to work hard and dedicate themselves, Jones is steadfast in her belief that athletes are the role models for young people to aspire to be.

“In certain other countries sports personalities are seen as the biggest people in the public eye, even bigger than other people on the TV,” said Jones.

“Right now sport is on everybody’s lips and I think that is a great thing. Sports people are proper role models to kids; anyone can get involved, work hard and become a success.”

The coaching masterminds behind the athletes’ successes have become prominent figures in their own right. And Jade is gushing in her praise of GB national team coach Paul Green, the man with whom her emotional celebrations were memorably broadcast upon announcement of the gold medal success.

The warmth and respect for Green is evident, as Jones believes that without the Athens 2004 competitor mentoring her, success would not have been achieved.

“Paul Green is a legend and I definitely couldn’t have won it without him,” she says with great certainty.

Such was Green’s dedication that he worked relentlessly around the clock in order to get Jones prepared through extra training sessions to work on anything requiring attention.

“I didn’t feel my sharpest on the day but the tactics were just perfect,” she added.

After last week announcing plans to take time off for the rest of the calendar year, Jade has her sights set on a return in 2013, with the world championships in Puebla, Mexico on her mind.

But for now, all plans are geared towards the more immediate future.

There is the not-so small matter of an open top bus parade through Flint, as well as the obligatory golden post-box that was recently unveiled in high street of her hometown.

There are also plans for the town to name a leisure centre in recognition of her win.

But remaining enduringly modest and never one to rest on laurels, Jones believes there is much work to be done if a successful defence is to occur iN Rio, having already announced her intention to compete in four years time.

“In taekwondo, you can peak at any age. As I’m only 19, I have so many things I can improve on, perhaps get physically stronger with age,” she says.

“I’m always looking to improve and there is certainly a lot more to come.”