Liverpool sell Alberto Aquilani to Serie A side Fiorentina, with most Reds fans wishing the midfielder all the best on Twitter 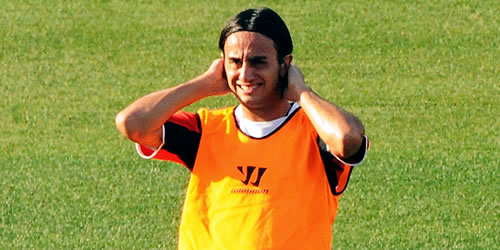 Alberto Aquilani has ended his Liverpool nightmare and joined Serie A outfit Fiorentina on a permanent deal.

The 28-year-old made just 28 appearances for the Reds after Rafael Benítez signed the midfielder in a £17m deal from Roma in 2009.

Despite Aquilani’s disappointing spell at Anfield, the majority of Liverpool supporters were sad to see the Italy international leave on Twitter.

Liverpool defender Jose Enrique (‏@jose3enrique3) will miss his former team-mate: “We are going to miss you amigo Aquilani!!!”

Mark O’Toole (‏@Tooley92) is less upset to see him go: “So Aquilani is finally off the wage bill, can’t really thank him for what he has done for Liverpool, played about four games!”

Eziz Allamov (‏@Ezizallamov) makes a valid point: “There must be a serious reason as to why six coaches (Rafa, Roy, Delneri, Kenny, Allegri, Rodgers) decided to pass on Aquilani!”

However, Khairil Idzwan (‏@K_Idz1) wishes the Italian good luck: “Nothing but best wishes for Aquilani. Pity it didn’t work out for him at Liverpool!”

Tafadzwa Raymond (‏@TRaymond007) adds Aquilani to the list of players who should not have been sold by Liverpool: “@LFC disappoints at times – Alonso, Sami, Anelka, Riise, Aquilani, Babel, Benayoun, Keane, Meireles all players that should have never left.”

Hardeep Singh (‏@TheRealistSingh) still feels Aquilani could have replaced Xabi Alonso if given the chance: “I always thought Aquilani was the man to partially fill the void left by Alonso – good passer, vision… I guess it wasn’t meant to be.”

Solomon BA (‏@akuicomEn) refuses to criticise Aquilani: “I will never blame Aquilani for what happened. We brought him to replace Alonso but sadly it was never meant to be that way.”

John Rayner ‏(@rayner_john) is just happy a solution has been found: “Aquilani sold … always felt he had potential for us, but glad his situation has been sorted out one way or the other.”

But Sam Bailey ‏(@SamuelDBailey) reckons the whole affair was a terrible bit of business by Liverpool: “Aquilani has to be one of the worst pieces of business I’ve seen in a while?”

Arooj ‏(@AroojM) agrees: “I still can’t quite believe how bad of a signing Aquilani was and how some Liverpool fans couldn’t grasp this because he was a Rafa Benítez signing!!”

Kofi Kwarteng Basoa (‏@kba_pro) wants Joe Cole out at Anfield next: “With Aquilani gone, next should be Cole. It’s time to get rid of money consuming bunch of non-performers! #lfc”

Maebh Cotter (‏@maebhcotter) hopes Rodgers will now buy a winger: “I’m glad Aquilani is gone. Get some funds for a much-needed winger! #LFC”