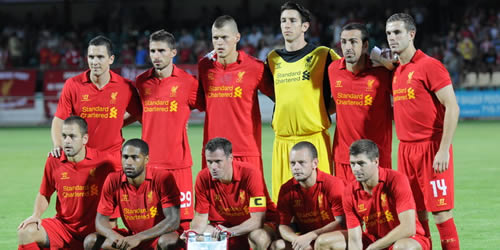 The 27-year-old scored the winner in the Reds’ 1-0 victory over Gomel in the first leg of their Europa League third-round qualifier last week.

The England international has been subjected to heavy criticism following a disappointing start to his Liverpool career after completing a £20m switch from Aston Villa in July 2011.

However, Downing is looking forward to returning to the position which brought such success for the Middlesbrough youth graduate at Villa Park.

“All managers have their different ways of playing and this manager sees me as playing on the right a little bit more,” Downing told the Liverpool Echo.

“He wants me playing higher up the field and getting in goal scoring positions because maybe I was a little bit deep last season.

“Hopefully that will happen and I will be in the position to score more goals.

“I did two years there at Aston Villa under Martin O’Neill and Gerard Houllier and enjoyed it. Kyle Walker was behind me and Johnno [Glen Johnson] here is a similar type of player.

“I got used to it and do enjoy playing there. I got my goal from that position the other night and sometimes defenders don’t like wingers coming inside.”

He added: “Everyone is thinking about the way the new manager plays and if they are going to fit in and get to play.

“But the only thing you can do is train well and prove yourself in games. All you can do is show the manager you deserve to be in the team.”

Luis Suárez: I’m a Liverpool fan and it’s a dream to sign a new contract