London 2012 Medal Count: Great Britain sealed three gold medals as they moved up to fourth in the standings after Day Seven 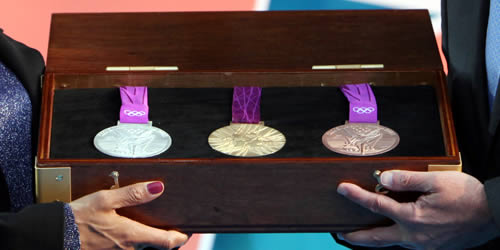 Three golds for Great Britain helped the hosts move up to fourth in the London 2012 medal table on Friday.

China still hold a slender lead at the top of the standings, with the United States of America in second place. South Korea are third with a total of 16 medals, with the hosts close behind.

Great Britain’s first of three golds came in the morning as Katherine Grainger secured victory with Anna Watkins in the women’s double sculls on Dorney Lake.

And it was another successful evening in the Velodrome for the hosts, as Victoria Pendleton won the Keirin after Steven Burke, Peter Kennaugh, Ed Clancy and Geraint Thomas had powered to victory in the men’s team pursuit in a new world record time.

Elsewhere, Rebecca Adlington was stunned by 15-year-old American Katie Ledecky in the women’s 800m freestyle final at the Aquatics Centre as the Brit was forced to settle for her second bronze medal of London 2012.