Luke Patience and Stuart Bithell take silver in the 470 class for Great Britain, finishing behind Australia at Weymouth 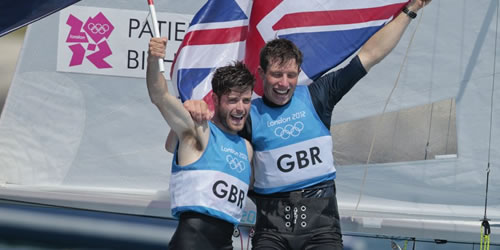 Luke Patience and Stuart Bithell were competing at their first Games Photo: onEdition

Luke Patience and Stuart Bithell took silver in the 470 class for Great Britain as they finished behind Australia at Weymouth and Portland on Friday.

It was the duo’s first Olympic Games and, despite the initial disappointment of failing to beat the Australians, they showed their delight at landing a medal by front-flipping into the water.

Patience and Bithell needed to put a single boat between them and their Australian rivals, and although they managed it for a small time, Matt Belcher and Malcolm Page proved too quick in the light winds.

The British pair finished fourth in the medal race, two places behind their rivals, but silver was already secure heading into the final race and the two were delighted with their performance.

“We tried it. We got the better of them at the start and managed to sneak ahead but we were kind of hoping the fleet would be there to hold them up,” said Bithell.

“They sailed a fantastic race, we tried to attack them when we could but they held their nerve and they’re worthy champions.”

And skipper Patience added: “It’s just so good to get Silver. It’s been three or four years of hard work together and 15 years in our heads and we’re on the Olympic podium.

“It’s not Gold but we’re young boys and there’s plenty of time. Stuart’s a legend and we’re happy boys. What a week!”