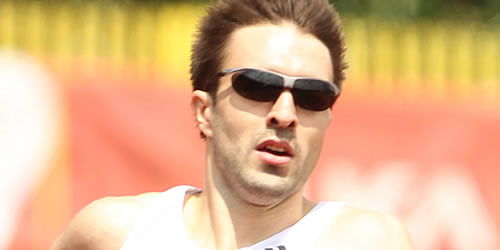 Great Britain’s relay quartet put on a fine display to finish second in their heat and book a place in Friday’s London 2012 4x400m final at the Olympic Stadium.

The team of Nigel Levine, Conrad Williams, 400m hurdler Jack Green and Martyn Rooney clocked 3:00.38, the same time as winners Trinidad and Tobago, who just shaded first on the line.

Team GB were ranked fourth overall after the second and final heat, which was won by the Bahamas in a time of 2:58.87, a time matched by second-place USA.

Two-time European under-23 champion Levine took the lead with a solid first leg. Williams was next up and with a superb first bend he kept the Brits in contention. A scintillating third leg from hurdle specialist Green meant Rooney received the baton in first place, and after easing up on the line GB finished just a whisker behind Trinidad and Tobago.

South Africa dropped out, denying Oscar Pistorius a run, as did the Jamaicans, with the Dominican Republic being disqualified. Britain’s biggest challenge in the final tomorrow night will come from the USA, Bahamas and Trinidad and Tobago.

Levine, who finished sixth in the individual 400m semi-finals, said: “After my own disappointing semi-final, I have learned a bit more about the track, so it was pretty good. Obviously, we are tired, but for the final, hopefully it will be a bit better.”

Williams, who was also eliminated in his individual event, said: “It means so much for the group. We controlled the race.”

Green who crashed out of the 400m hurdle semi-finals after hitting a hurdle, ran the relay leg of his career. He said: “I wanted a chance to run after my disappointment in the 400m hurdles. I had a lot to prove and I would like to think I deserve to be on this stage.”

Rooney added: “It was incredible. I want to apologise to the guys for not winning it. Trinidad’s guy was a sprinter and he dipped at the end. Tomorrow, we will come back and do better.”