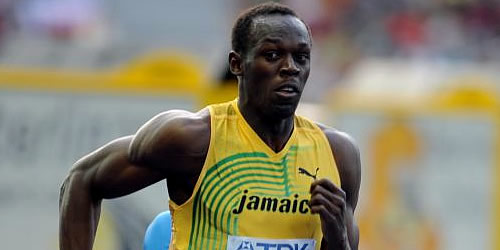 Triple Olympic champion Usain Bolt strolled into the 100m men’s semi-finals after a comfortable victory in his heats.

The Jamaican’s highly-anticipated appearance occurred in heat four, beside Great Britain’s James Dasaolu, and the 25-year-old showman made a mockery of the pre-Olympic doubts surrounding him with a solid 10.09 seconds, as Dasaolu also booked his place with 10.13 secs.

The Olympic Stadium was full-to-the-brim as eager spectators cheered on the world record holder, something that Bolt has been waiting for.

“I expected it that crowd reaction,” said Bolt, who also claimed the 200m and men’s 4x100m relay titles in Beijing.

“I’m happy and I’m looking forward to the semis. It was a bad start, I stumbled. The reaction was good but I stumbled. I’m glad it happened now.”

And after destroying his own world record in China – clocking a time of 9.69 secs in the final – Bolt remained coy about doing the same in London.

With all eyes on the defending champion, some of his supporting players had the chance to book their places in tomorrow night’s semi-finals.

USA’s Tyson Gay took victory in the opening heat with 10.08 seconds, ahead of Beijing silver medallist Richard Thompson with 10.14 secs.

And Gay’s compatriot Justin Gatlin laid down his own marker as he eased to the win in the second heat with 9.97 secs – the first sub-10 secs time of round one – before the American show continued with Ryan Bailey’s 9.88 secs.

Dwain Chambers, the second fastest British sprinter of all time behind Linford Christie, lined up in the seventh and final heat and joined team-mates Adam Gemili and Dasaolu in tomorrow’s semi-finals with a season’s best 10.02 secs.

And 34-year-old Chambers admitted he was unsure how he would react to the home crowd as he completed the British trio of qualifiers.

He said: “You don’t understand how nervous I was, it was nerve-wrecking out there. I’m just glad to get through the heat.

“The roar of this crowd is amazing. I can see how much an impact it’s having on Jess [Ennis] and everyone else.

“Just getting here in itself has been a battle and now I’m here I’m really happy. It’s a very fast track and my season’s best was 10.25secs. It all bodes well but I still have to get through the rounds.”

Former Chelsea footballer Gemili clocked a scintillating time of 10.11 secs – after the 18-year-old only decided to become a professional sprinter in January this year.

Bolt’s main rival Yohan Blake – who beat Bolt twice in the recent Jamaican championships – ran a flat 10 secs to help him on his way to the 100m final and lay down the gauntlet.