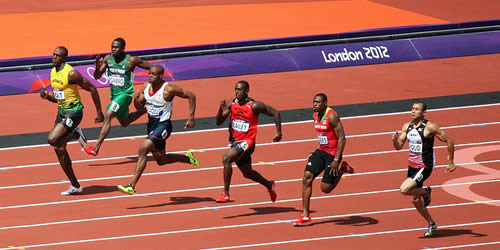 Usain Bolt eased into the 200m semi-finals on Tuesday Photo: Sum_of_Marc, via flickr

Usain Bolt strolled into the men’s 200m semi-finals after a confident display on the track at the London 2012 Olympics.

After decimating one of the most-anticipated 100m final line ups on Sunday – setting the second fastest time in history with 9.63 seconds – Bolt will be hoping to emulate his golden performance in his preferred race, and emphatically threw down the gauntlet to his competitors.

And with the Jamaican proving his pre-event critics wrong with a new Olympic record, he admitted how much he is enjoying his third Games.

“The crowd is always wonderful and they play a very important role in my running. I love my 200m so I was enjoying it,” said the 25-year-old.

“I try and do my part – I know what comes with winning and my success and all you can do is enjoy it.”

Bolt crossed the line first with a time of 20.39 secs, despite jogging the last 50m, and the first white man to run the 100m under 10 seconds, Christophe Lemaitre, began his Olympic campaign with a time of 20.34 secs to join the Jamaican in the semi-finals.

Silver medallist in the 100m final Yohan Blake mirrored his countryman Bolt by strutting across the line as he continues to shine in his debut Games and clocked a time 20.38 secs.

The Jamaican beat the world record holder twice in the Olympic qualifiers before the Games and revealed how necessary the 100m final was to his experience.

“My foot was cold, but I’m good. The 100m taught me a lot. This is my first medal of the Olympics and every day I’m feeling confident,” said the 22-year-old.

“I love the 200m too. I think it’s my better event as I have more speed endurance.”

Great Britain’s Christian Malcolm, making his fourth appearance at an Olympic Games, chases his first medal after missing out on the men’s 4x100m gold in Athens while recovering from kidney failure.

And the 33-year-old secured his place in the semi-finals with a strong time of 20.59 secs.