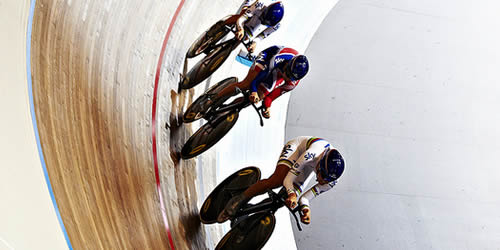 They beat Canada by almost three seconds in qualifying, clocking 3:14.682 to secure the world record and line up a place in the final.

And they sliced around half a second more off the mark against the USA, clocking 3:14.051 as they hunted down their rivals and finished on the same straight after a stunning performance.

“The crowd were absolutely fantastic and they really pushed us on through the last kilometre,” said Rowsell, 23.

“The last couple of laps we could just about see them, but we had to keep pushing to the finish. I knew we could do it. Getting the world record is a bonus but it’s all about this Gold medal.”

Twenty-year-old Trott added: “It’s just mad! I feel very emotional because this has been my dream since I was eight, and we’ve only gone and done it!”

And King, 21, added: “That was fantastic I just can’t believe we’ve actually done it!”

There was also a record broken in the men’s sprint, with 24-year-old Bolton-based rider Jason Kenny setting a new Olympic record for the final 200m in the qualifying round with 9.713 seconds.

He went on to beat South Africa’s Bernard Esterhuizen in the 1/8 final, to reach the quarter-finals on Sunday.

Meanwhile, Ed Clancy sits fourth in the Omnium event after the first day, thanks largely to a good ride in the opening 250m flying lap time trial where he was fastest with a time of 12.556 seconds.

He was 11th in the points race, and then in the elimination race was placed fifth, leaving him on 17 points overnight.