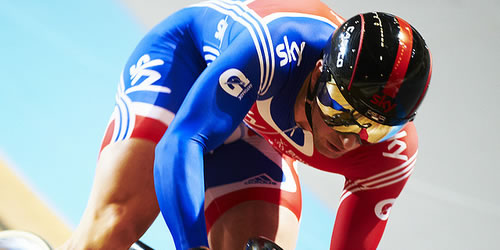 Jason Kenny made it two out of two at the London 2012 Olympics by storming to gold in the individual sprint at the Games.

The 24-year-old Briton, who already has a London 2012 team sprint gold medal, blasted through to beat France’s Gregory Bauge and gain revenge for silver in the world championship final earlier this year.

Kenny, now a three-time Olympic gold medallist, was delighted to edge out his old nemesis in another tight finish.

“It’s amazing. I hadn’t even thought about it until we got on to that last ride and it suddenly dawned on me,” he said.

“The battle I had just to get here with Sir Chris [Hoy] – knowing that you’ve got someone on the sideline who definitely wouldn’t give that second sprint away I thought I better not mess this one up now I am really pleased to deliver for the team.

“I was really pleased with that. We were really close once again and it was slightly the other way at the worlds.

“Last year and the year before he’s been the slightly faster rider and every race has come down to that.

“Three days ago I qualified a little bit quicker and again the race has come down to that again. I like racing against Bauge – he’s a nice fast fair rider and it’s always a quite exciting race.”

Kenny, who claimed silver behind Sir Chris Hoy in Beijing, beat Trinidadian Njisane Nicholas Phillip in the semi-finals earlier in the evening.