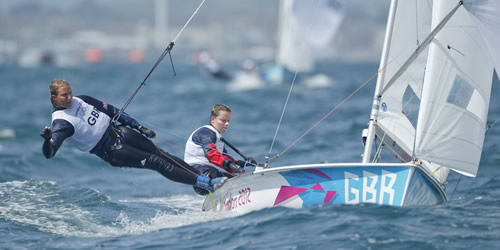 Sailors Hannah Mills and Saskia Clark will head into the final medal race in the women’s 470 on Friday needing to beat New Zealand to claim gold at Weymouth and Portland.

The duo, who are now guaranteed at least silver, are level on points with the Kiwis after finishing second in the final race of the day, making it a straight fight for the top spot as they head into the final double points medal match.

Mills and Clark finished their first race of the day in eighth spot, but clawed back a three-point gap in the penultimate race of the regatta as they finished second, with the New Zealand boat having to use their discard to effectively finish tenth.

“We had a pretty tough race earlier but came back really well in the second race. We just wanted to make sure we went into the medal race tomorrow with a chance,” said Clark.

“My dream was to go an Olympics and maybe become a medallist but to be guaranteed of a medal and have a chance of Gold is absolutely awesome.”

And for Mills, who is making her Olympic debut, it has been a rollercoaster ride: “We have had a really good week. Some things have not gone our way but it is swings and roundabouts and we are now level points.”

It will be Great Britain’s fifth sailing medal to go alongside the guaranteed medal from their male counterparts in the 470, who will also challenge for gold on Thursday against Australia.

But there was no medal for Stevie Morrison and Ben Rhodes in the men’s 49er. The pair were involved in a six-way battle for bronze but came up just short on the variable Nothe course as the gusts of wind favoured their opponents as they finished in fifth overall.