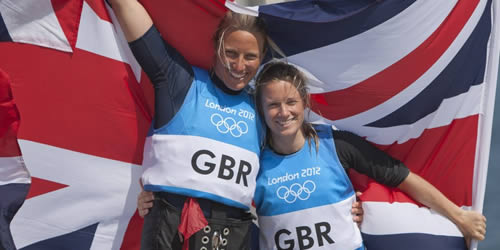 The duo needed to finish ahead of their New Zealand rivals to claim gold and began strongly, finding themselves ahead from the start.

But a change in wind direction caused them to drop off the pace and they never recovered.

The Brits ended up finishing ninth, while Kiwis Jo Aleh and Olivia Powrie took first place to claim the country’s first gold on the water at London 2012.

The British pair were both initially upset with the final result, but then the reality began to sink in that they had matched their male counterparts, Luke Patience and Stuart Bithell, who won silver just an hour or so earlier.

And although Clark was gutted that the pair couldn’t claim gold, she admits they began the event not even thinking about the podium.

“We had the Kiwis on the start line and then we let them go to the right and we were wedged in with a few boats and couldn’t follow them out there,” she said.

“Then when the wind dropped we knew the gold medal was gone. But Hannah’s a legend, when we started sailing together 18 months ago we put everything in and we weren’t even thinking about medals.”