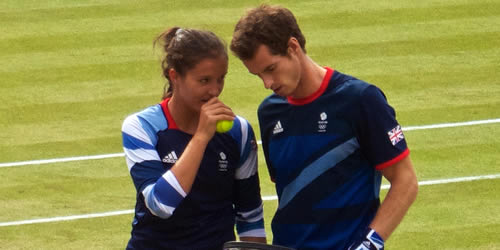 Great Britain’s mixed doubles duo Andy Murray and Laura Robson were beaten by Victoria Azarenka and Max Mirnyi of Belarus in the Olympic final at Wimbledon on Sunday.

Murray, who defeated Roger Federer in straight sets to clinch the Olympic singles gold only hours earlier, was back on Centre Court to team up with Robson as they lost out 2-6 6-3 10-8 and were forced to settle for silver.

The pair, who last played together before the Olympics at the Hopman Cup in 2010, clinched the first set but the Belarusian duo fought back and levelled in front of a noisy and increasingly tense crowd.

Murray and Robson saved two match points before eventually falling to the Belarusian doubles specialists by the 10-point champions’ tie-breaker as they showed why they were the top seeds.

Murray said: “She [Robson] played some great tennis, today. We would have signed up for a Silver at the start of the event but it was just annoying to lose in the end. It was just a couple of points that got away from us.”

Robson added: “They were a really good team but I have to thank Andy for playing with me, it’s been the best week of my life.”