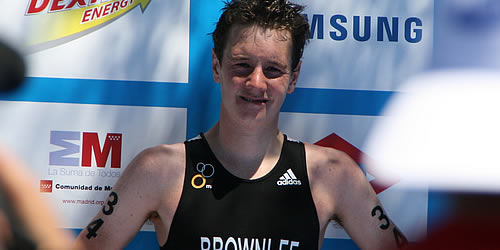 Defending world champion Alistair, 24, was favourite to take the Olympic title in the 55-man field after overcoming an Achilles injury, and the brothers’ bid was aided by British Triathlon using Stuart Hayes, 33, as a domestique.

The 1500m swim saw the world-class field spread right across the Serpentine and Alistair, Jonathan and Hayes were all well-placed as the 43km bike ride loomed.

Alistair left the water in fourth place, with Jonny exiting in fifth and Hayes was just behind the lead group in eighth.

Canadian Simon Whitfield, the first Olympic triathlon winner in Sydney 2000 and Beijing Silver medallist, was forced to withdraw after an early crash in the bike stage as a lead group of five emerged.

Just as the chase group battled to keep sight of the leaders, news emerged that Jonathan would have to serve a 15-second penalty for mounting his bike too early in the transition stage ahead of the white line.

After 20km of the bike ride, Stuart Hayes had come to the fore to assist Alistair and Jonathan, who he led from after 50 minutes.

The pace set by the British trio began to tell as the lead group whittled down to three, with the Brownlees joined by their greatest rival Gomez as Hayes slipped in behind them to monitor the chase group.

After an hour-and-a-half of racing, Alistair made a break and was followed by Gomez, who desperately tried to keep in touch as the gold medal appeared to be heading to Yorkshire.

As Alistair charged on, his brother opted to serve his 15-second penalty after the second of three laps on the run and rejoined the race still in third position ahead of Frenchman Laurent Vidal and David Hauss.

As Alistair entered the home straight, he picked up a British flag from the teeming crowd and savoured every moment as he strolled nonchalantly across the line to the roar of the ecstatic grandstand.

Gomez crossed second, 11 seconds later and Jonathan Brownlee clinched a superb bronze as he finished 30 seconds behind his brother and the pair shared a touching embrace to celebrate their success.

Alistair said: “It feels a bit underwhelming because Johnny has collapsed, but, no, really, it is fantastic. The race was unbelievable and the crowds were amazing. My ears are still ringing from all that noise.

“I am massively proud. The pressure was stacked up and so many things have been put to bed today.

“To get two British brothers on the podium, you could not ask for more and with Stuart Hayes we really were a team of three. Today we had a plan and we executed it really well.”