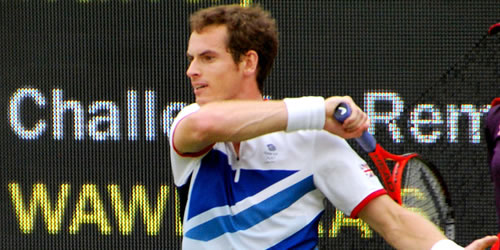 Andy Murray’s quest for Olympic Gold remained on track after he eased past injured Spanish opponent Nicolas Almagro 6-4, 6-1 to reach the semi-finals at Wimbledon on Thursday.

The British No1 will now face either Novak Djokovic of Serbia or France’s Jo-Wilfred Tsonga in Friday’s semi-final and is guaranteed to feature in the medal matches on Sunday.

Asked about his approach once he knew Almagro was suffering with a shoulder problem, Murray said: “You try not to change too much. I think that’s one of the most important things.

“You need to try and stick to the tactics you had when you came out on court. It’s difficult but it’s something with experience and age you learn to deal with.”

Murray’s progress was watched by a clutch of Royals and VIPs at SW19. The Duke and Duchess of Cambridge were in the stands and deputy Prime Minister Nick Clegg was also courtside.

But being under such scrutiny does not particularly faze Murray.

“You try not to be [fazed],” he added. “But the crowd make a lot of noise when they come out. It’s great for tennis when you get people like that coming to watch.

“They [the Duke and Duchess] were here during Wimbledon as well so it’s good fun.”