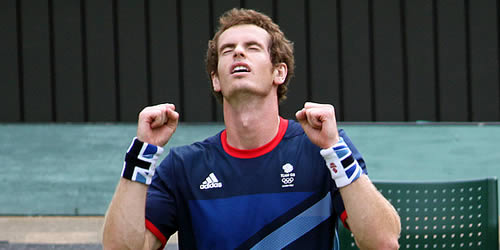 Andy Murray forced his way past Novak Djokovic in impressive fashion on Centre Court at Wimbledon to guarantee at least a silver medal at the London 2012 Olympics.

Murray clinically disposed of his Serbian rival 7-5 7-5 in exactly two hours to set up a revenge tie against Switzerland’s Roger Federer just a month after his four-set defeat in the Wimbledon final.

Murray said: “The support that I have had over the last month, after Wimbledon, I really needed it.

The Scot is currently playing some of the best tennis of his career and is looking forward to the chance to bury his demons at SW19.

“It was an unbelievable atmosphere. I saved a lot of break points,” added Murray. “He had a lot of chances in the second set, but I just managed to hang in. It’s amazing.

“I just wanted to try and win a medal for the team, for the country and lastly for myself. I’m so happy; I would love to win the Gold medal.”

The final will take place on Centre Court at Wimbledon on Sunday.