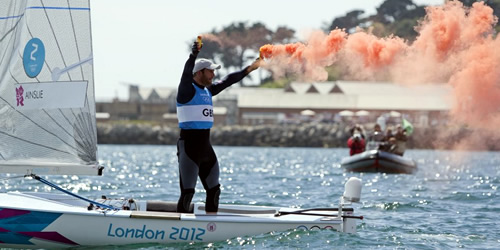 Ben Ainslie admitted it was a “scary” race after he triumphed in the ‘Battle of the Bay’ against Denmark’s Jonas Hogh-Christensen as he claimed gold in the Finn class at Weymouth and Portland.

Ainslie has now won four consecutive gold medals to add to the silver he won in Atlanta 1996, overhauling Denmark’s Paul Elvstrom for the title of the most decorated sailing Olympian with five medals to his name.

In a nail-biter of a finish, Ainslie controlled the race spectacularly knowing that he only had to finish ahead of Hogh-Christensen to finish first, and the Macclesfield-born sailor did not concern himself with a race win and in the end cruised to his title.

The pair ended the regatta level on 46 points, with the Brit taking the gold because he finished higher in the final medal race.

“That was one of the scariest races I have ever had to go through, the wind was all over the place making it very, very difficult,” said Ainslie.

“I stuck to it and did the job – it’s just an amazing feeling and I can’t thank everyone enough who has helped me over the years to get to this point.

“Everyone in our team, from the coaches to the support staff and the other team members and sailors – they are a fantastic team who have helped me get here.” 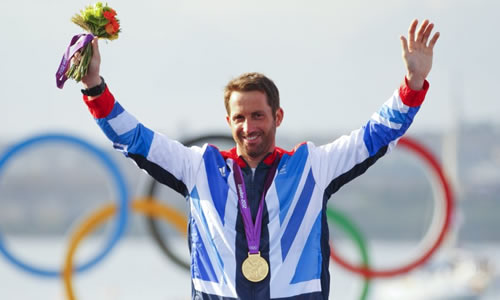 It was Team GB’s second medal on the waters of Weymouth after Iain Percy and Andrew Simpson claimed silver in the Star class.

The pair knew that bronze medal position was all but sewn up as they headed into the double points medal match needing only a sixth-place finish to defend the title they won from Beijing 2008.

They held an eight-point advantage over nearest rivals Robert Schiedt and Bruno Prada of Brazil, but Sweden’s Fredrik Loof and Max Salminen were also a threat, and the Swedes controlled the fleet from the start of the race.

The Team GB pair gave their all in their battle for sixth and looked as though it was certain with just 200 metres to go.

But a sudden gust of wind propelled three boats past Percy and Simpson, condemning them to silver with the Swede’s claiming gold, and Brazil with bronze.

“It can be cruel,” said a distraught Percy. “It feels it at the moment. That’s the problem, you end up racing in ridiculous conditions but we got it wrong. It’s pretty gutting, we feel a bit robbed but we will have to take it on the chin.”