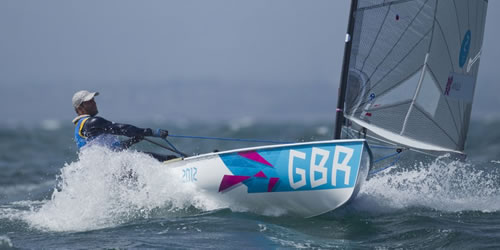 Ben Ainslie boosted his hopes of securing a sailing gold when he performed superbly in the second race of the day on Friday in the Finn class at Weymouth.

Macclesfield born Ainslie will go into the medal race ahead of rival Jonas Hogh-Christensen – the first time he has headed the Dane in the event.

Ainslie conceded a place to his main rival in the first race of the day as he finished sixth, but there was to be no close finish in the second as the Brit romped home to victory.

And not content with simply winning the race, Ainslie forced Christensen down the field with some extraordinary match race sailing and now needs to beat the Dane on Sunday to claim his fourth consecutive Gold in the Finn class.

“I’ve got to say after six races I was pretty concerned that I couldn’t get back into this race, it’s taken me all week to find the turbo button and get out in front, but it’ll be a fantastic race on Sunday,” said Ainslie.

Meanwhile, Ian Percy and Andrew Simpson continued their dominance in the Star class as they stretched their lead in the Gold medal spot to eight points ahead of their great rivals from Brazil Robert Schiedt and Bruno Prada.

“We feel that we have been sailing a good week so far but the Brazilians and the Swedes have also been sailing brilliantly,” said Percy. “The first race didn’t go that well and we managed to pull it back to fourth, but in the second race we just blitzed it so it was good news.”

The duo finished sixth, outside the top five for the first time since the opening race of the Regatta. But they were back to their imperial best in the second race, and notched up another first.

Meanwhile, in the men’s 470, Luke Patience and Stuart Bithell kept their good form going as they finished day two of their Regatta with fourth and second, leaving the pair comfortably out in front with a six-point gap between them and the Australian boat of Matthew Belcher and Malcolm Page.

The women’s 470 got underway on Thursday as Hannah Mills and Saskia Clarke got their Gold medal campaign off to a solid start, recovering well from a disappointing first race which saw them finish sixth to win the second race of the day.

The pair had to take a penalty turn before the start line which cost them valuable time, and although they recovered well they could not force their way into the top five. But in the final race of the day they showed their true credentials as they ran out comfortable winners.

Elsewhere, Paul Goodison will need a stunning day on Friday to make it into the medal race in the men’s Laser on Sunday. With just one race day left the reigning gold medallist, suffering with back problems, lies in 17th place with just the top 10 advancing through to the double point match race.