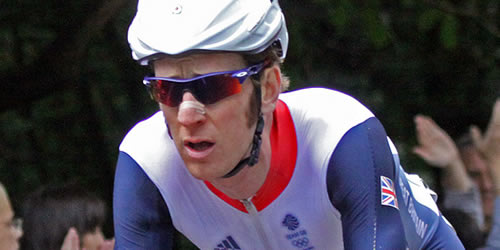 Bradley Wiggins is now Great Britain's most successful Olympian Photo: B A Ryan, via Flickr

Bradley Wiggins snatched Great Britain’s second gold medal of the day after powering to a fine victory in the London 2012 Olympic time trial.

The Tour de France winner rode a flawless time trial, moving ahead of German world champion Tony Martin’s time at the second check at 18.4km and never looked back – stretching his lead at every subsequent check.

Wiggins completed the 43km course – which started and finished at Hampton Court Palace – in 50 minutes 39.54 seconds, much to the delight of the thousands of fans who had gathered to watch him make history.

“It was phenomenal, the noise was amazing,” said Wiggins. “I don’t think my sporting career will ever top this now. That’s it. It will never, never get better than that. Incredible.

“It had to be gold today or nothing. What’s the point of seven medals if they’re not the right colour? Mainly it’s about the four golds. Now I have to go to Rio and go for five.”

Team GB team-mate Chris Froome, who finished second in last month’s Tour de France, missed out on silver to Martin by 26.33 seconds but will be delighted after clinching bronze in 51:47.87.

The 32-year-old Wiggins is now Great Britain’s most successful Olympian after taking his personal tally to seven and eclipsing Sir Steve Redgrave.

“Bradley Wiggins has cemented his position as one of the greatest British Olympians ever,” said Team GB chef de mission Andy Hunt. “To claim an Olympic gold medal and the Tour de France in the span of less than four weeks is nothing short of extraordinary.

“As with rowing, the Bronze medal won by Chris Froome shows the outstanding work being done by British Cycling to develop world-class athletes throughout the programme.”

Wiggins must be knighted! Twitter reacts to Bradley’s cycling gold