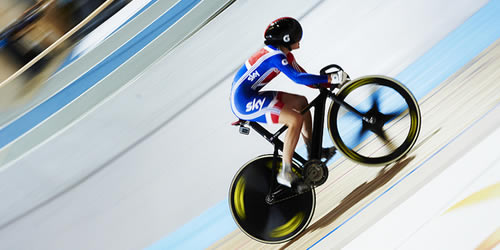 Pendleton took the lead a lap out from the finish of the Keirin and held her position with a superb display of grit and strength to the line.

“I can barely believe it,” said Pendleton. “It was really hard with the excitement of the girls [Trott, King, Rowsell] doing such a great job qualifying with a world record, and then the guys smashing the world record and winning gold, and I was just trying to keep my focus.

“Jan [van Eijden, her coach] told me to just race my own race. My legs were good from last night and I still really wanted to show what I’ve got and it went OK I guess!”

Shortly before Pendleton’s triumph, Steven Burke, Peter Kennaugh, Ed Clancy and Geraint Thomas powered their way to team pursuit gold in another world record time, leaving the Australians in their wake in the 4,000m event.

The quartet had already broken the world record in qualifying for the final on Thursday, and after going close to another record in the semi-finals, they blasted their way to victory in 3:51.659.

The pace was so high that GB were always ahead, and Australia’s quartet were down to a bare three riders for the final three laps which saw their pace drop off dramatically.

“It’s a surreal feeling,” said Kennaugh. “And one that we will only come to terms with in time. It feels like we’ve talked this to death over and over again, and now we’ve done it and we’ve won, it feels strange.”

Clancy added: “I can’t explain how I feel, we’ve spent so many years thinking about this moment, and when it happens there’s just a massive explosion of emotion.”

Earlier in the Velodrome, the women’s team pursuit trio of Dani King, Jo Rowsell and Laura Trott set a new world record time of 3:15.669, and were 3.8 seconds quicker than the next best qualifiers.

They will go into the second round on Saturday afternoon, taking on Canada at 16:11, with the final taking place on 17:42 if they can qualify.