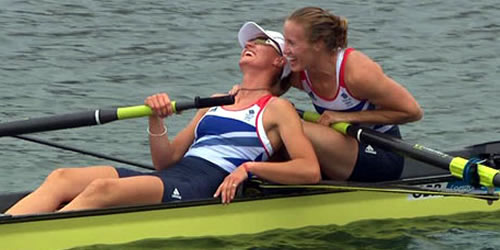 The pair burst out of the gate at lightning pace and had clear water between them and their nearest rivals within the first 1,000 metres, before crossing the line in 7:27.13 minutes to claim gold.

The pair were exhausted but exhilarated to make history for women’s rowing – as well as winning Team GB’s first gold of the home Games.

They beat Australia and world champions New Zealand into second and third, and the two were delighted that the tactics they have stuck too all season worked.

“You can see from all the races we’ve done this season that we’ve moved ahead early, and then tried to stay there and push on the margin,” said Stanning, who will return to military duty after the Games.

“That’s exactly what we tried to do today – we didn’t want to give anything away. We wanted to keep that same margin we had before all the world cups. I had Helen in my ear saying keep going, but I could see them all behind me.

“My body wants to go into shutdown but it can’t because I’m too excited. I’m absolutely shattered and ecstatic at the same time. I want to collapse but I’m so overjoyed and I just want to run around.”

Truro-born Glover, who joined the rowing system through the Sporting Giants’ programme four years ago, thought this moment would never come.

She said: “I don’t remember smiling because I just didn’t think we’d ever do this. We went through the orange buoys and I thought, yeah we’ve got this.

“That probably wasn’t a smile at 200m left – it was probably a grimace.

“I took up rowing after watching four years ago. If I can do it, anyone can take a chance and anyone can do anything.”