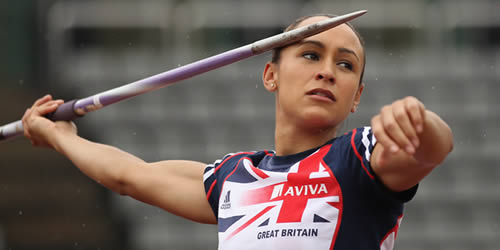 Jessica Ennis made a great start to her gold medal pursuit in the first heptathlon session on Friday, with Team GB youngster Katarina Johnson-Thompson not far behind in third.

Former world champion Ennis ran an incredible 12.54 in the 100m hurdles, the first of seven events as the Olympic Stadium opened for sporting business.

It was not only the fastest time run by a heptathlete but a time that equals Dawn Harper’s winning 100m hurdles time from Beijing.

Running in the last of five heats amongst her biggest rivals, world No1 Ennis outclassed current world champion Natalia Chernova, Beijing silver medallist Hyleas Fountain and Commonwealth silver medallist Jessica Zelinka to put her top of the leaderboard after the first event.

Ennis carried her fine form on to the high-jump, producing a jump of 1.86 metres which confirmed her lead after the morning session, with a score of 2249.

Team-mates Louise Hazel and Johnson-Thompson made fine starts to their Olympic campaigns, and were joint 15th after the hurdles.

It then got better for Johnson-Thompson in the high-jump. She was the class act as she produced a personal best jump of 1.89m – the best high-jump performance by a junior since 1997.

The stunning display wowed the packed crowds at the 80,000-seater stadium and pushed the world junior long jump champion well up the leader board to third, behind Ennis and American Fountain, with 2146 points.

Hazel could not improve on her jump of 1.59m which pushed her down to 37th at the end of the first session.

Delighted with her record-breaking hurdles performance, Ennis said: “When I crossed the line I had to double check as I couldn’t believe it was that time.

“But I knew it was a fast track and good conditions yet I still cannot believe I ran that time to be honest.”

And 19-year-old Johnson-Thompson was equally as excited with her morning performance. She said: “I’m sort of trying to come here and just absorb it and use it for future experience. I’m trying to enjoy myself, usually I’m trying to get a qualifier but this time I can actually just enjoy it.

“A top 10 finish would be in my dreams, but we’ll see what happens, I have shot-put next and that will bring me back down to earth!”