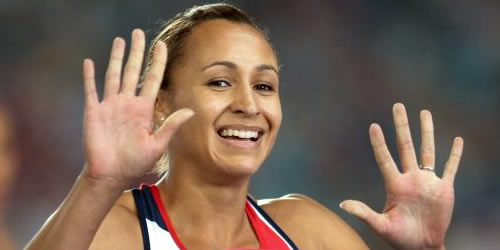 Ennis produced a fantastic performance over two days to bring home the gold – the first track and field medal won by a Brit in London since 1908 – and beat three personal bests in the process to finish on a new British and Commonwealth record score of 6955.

Going into the final heptathlon event – the 800 metres – the Sheffield-born athlete led nearest rival Austra Skujyte by 188 points and knew her personal best time over 800m is eight seconds faster than the Lithuanian.

And an emphatic run of 2:08.65 minutes secured the Olympic gold in style as the 26-year-old poster girl cried tears of joy and claimed she will savour every moment in the Olympic Stadium’s electric atmosphere.

“I am so shocked, I can’t believe it,” said Ennis. “After javelin, I didn’t let myself believe it.

“After all the hard work and disappointment of Beijing, everyone has supported me so much. They said ‘go for another four years’, I’ve done that.

“I’m going to savour the moment. I’ve had great support, although I have been under a huge amount of pressure.

“The crowd helped me and I can’t believe I’ve done it.”

But the night belonged to the Olympic debutant who cried tears of joy as the electric atmosphere cheered her to gold on home soil.

Ennis went into the second and final day as the leader with 4158 points, ahead of Lithuanian Skujyte’s 3974, and just the long jump, the javelin and the 800m stood in her way of Olympic glory.

The 26-year-old began her debut Olympic campaign in stunning fashion as she stormed the 100m hurdles in 22.83 seconds – a record for a female heptathlete in the event, and a new British record.

And after a below-par high jump of 1.86m failed to inflict too much damage to her lead, Ennis entered the evening with 2,249 points and a 25 point lead over USA’s Hyleas Fountain.

A disappointing performance in the shot put, where she managed 14.28m, half a metre blow her season’s best, relegated her to second behind the Lithuanian as the pair continued their tense battle.

But a personal best 200m run of 22.83 seconds saw the Brit regain her lead in fine fashion to take the overnight lead and set Ennis well on the way to Olympic glory on home soil.

The Sheffield-born athlete was insistent that victory was far from secured after yesterday’s performance and she made the best possible start to the day.

Team GB’s golden girl followed an superb 6.48m in the long jump with a personal best in the javelin – her third in the competition – of 47.49m.

The javelin had been marked as Ennis’ supposed weakest event and the 26-year-old made a mockery of any pre-Olympic doubts as she built up an almost unassailable lead going into her final event.

And after storming to victory in the 800m as she left her best to the last lap, the Olympic Stadium lit up in a way that even Danny Boyle couldn’t have produced.