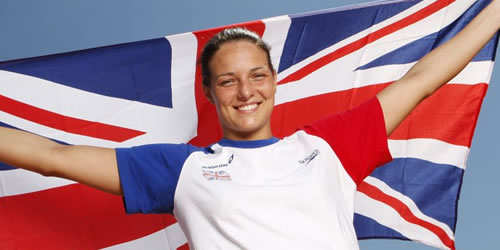 Keri-Anne Payne came agonisingly close to a second Olympic medal as she missed out on bronze by inches in the women’s 10km marathon swim at Hyde Park on Thursday.

Payne struggled to keep up with the fast pace set by Hungarian winner Eva Risztov and was narrowly beaten by just four hundredths of a second to third by Italy’s Martina Grimaldi, finally finishing in fourth.

“It just didn’t go my way from the start. I tried to get back up to lead but they played me at my own game,” said Payne. “The top 25 swimmers in the world were in the race and to come out fourth is not too bad. It was really close.”

The 10km swim is labelled as one of the hardest events at the Games, with the gruelling race lasting just shy of two hours. And although the Johannesburg-born swimmer managed to kick strongly at the end, it was not enough to force her way onto the podium.

But according to Payne, stopping at the feeding station was where her crucial battle for the medals was lost: “On the third lap I needed to feed and it was a bad decision as it all went wrong. I had to work pretty hard to get back to where I needed to be, and I probably worked a bit too hard.

“I’m more of a lover than a fighter and I really struggled in the pack after that feed with all the fighting, and I got hit in the face a few times on my way through.”

Payne is adamant, though, that this is not the last time she will be seen swimming: “I don’t know if that’s it for me [in open water swimming], it’s probably my last one for a while as I need a break but it’s not the last of me in swimming.”