Over five million spectators have passed through London 2012's venues so far, with the Olympic Park alone welcoming over 1m 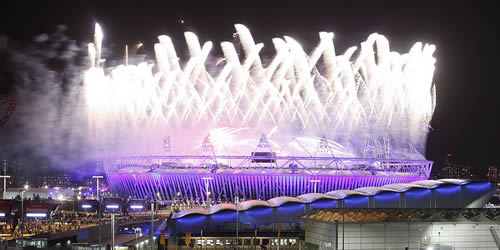 More than one million fans have visited the Olympic Park alone Photo: DCMS, via Flickr

London 2012 has passed the halfway mark and Locog have revealed that more than five million spectators have passed through its venues so far – with one million people visiting the Olympic Park itself.

As Great Britain celebrated its haul of six gold medals yesterday, Locog’s website has also become the world’s most visited sports website with 25 million visits alone on Friday – 25 per cent of which came from the UK.

Across the Games, 428 medals have been won by athletes from 58 countries and 85 Olympic records, including 32 world records have been set.

Locog chairman Sebastian Coe said: “The most pleasing part of the first week of the Games has been feedback from athletes and team officials who have said they have rarely, if ever, witnessed sport that has been so well presented, attended or so compelling.

“Our vision has always been to stage Games for the athletes, and we are thrilled that we have been able to deliver an electrifying and uplifting experience and environment for the best athletes of the world.”

Outside of the venues, big screens across the UK are attracting huge crowds as people cheer on the athletes. Yesterday saw around 300,000 visitors watching sport in city centre locations. It is estimated that 60,000 spectators came out onto the streets of London to watch the women’s triathlon event in central London.

Locog chief executive Paul Deighton said: “My overwhelming feeling is one of pride. I’m very proud of the show the UK is putting on, of the tremendous performance of our athletes and I’m very proud of my team which has given its heart and soul to these Games over the last seven years.

“I am also very proud of our brilliant volunteers who seem to be having an extraordinary impact on everyone they meet.

“The stars of the Games so far are the athletes and we are delighted to give them the stage to shine on, but they are telling us the stars are the crowds – their passion and the atmosphere they are creating is just incredible.”