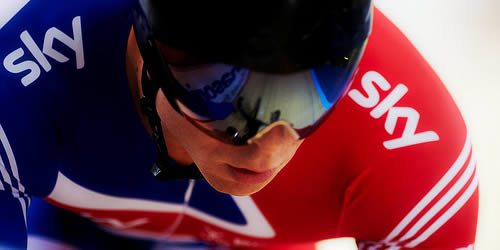 Hoy, a triple-gold medallist in Beijing in 2008, anchored Philip Hindes and Jason Kenny home in a world record time of 42.600 seconds to claim the title ahead of France.

The team previously lowered the world record to 42.747 secs in the heats as they qualified fastest from the first round and into the gold medal final – and Hoy was stunned by the team’s display.

“It’s quite overwhelming, but this hasn’t come out of the blue – we knew if we put this together, and had our best possible race, this was possible,” said Hoy.

“Usually we get one or two of us having a good day. We timed the taper perfectly at our camp in Newport. We nailed it, but the question for me was those three rides in one go.

“I dug deeper than I’ve ever dug before. I knew the importance of what it was and I didn’t want to let the boys down.

“They did so well today and it’s just immense pride to do it here in front of a home crowd in the UK. The crowd were phenomenal – that word gets used all the time, but they really have been.

“You can’t overstate what this means to us in front of a home crowd. It really is a once in a lifetime opportunity.

“It was said to me after Bradley’s time trial ‘This is your chance – you’re never going to get this again and go out there and enjoy it’. We enjoyed it. We gave it all and it worked out. The medal is bigger than previous ones.”

Kenny, an gold medallist from Beijing, admitted the team were wary of their changeovers after Victoria Pendleton and Jess Varnish’s dramatic relegation earlier in the evening.

“We were very careful with the changeover – it’s something we talked about after the world championships when we had the disaster, and it was something that we wanted to get absolutely spot on,” he said.

“It was devastating to see it happen to the girls, particularly after that we just kept everything really tight.

“Being a double-Olympic champion is amazing. This one, I can’t believe how quick we’ve gone. Phil went out the blocks like an absolute rocket and me and Chris were swinging all over the back of him just to keep up with him.

“It’s unbelievable that he’s found half a second in just under a year and he set us off perfectly.

“There’s a few guys here – the French, the Germans and the Aussies – they’re all flying. “That’s the quickest I’ve ever seen, so there’s no reason to think the individual won’t be same.”

“I can’t believe we are Olympic champions – it’s a dream come true,” he said. “I was trying to do a fast time and make the fastest possible time.”