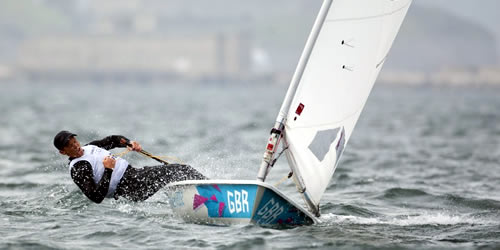 Paul Goodison in action at Weymouth and Portland Photo: onEdition

Paul Goodison vowed to continue fighting for a medal after Team GB’s sailors had a strong day in difficult conditions at Weymouth and Portland, where all classes are in contention for medals.

Despite a back injury which threatened his participation, Goodison was back out on the water today and forced himself into sixth place.

“Today was really about minimising the damage and minimising the losses but we still have got a chance here at the half way stage of the regatta.” said Goodison.

“There’s still plenty of fighting to be done, you can see by today how tricky it was.”

Meanwhile, Alison Young consolidated fourth position in the women’s Radial Laser as she notched up a second in the first race and then 11th in the final race of the day in what were tricky racing conditions, leaving her four points from Marit Bouwmeester (Netherlands) in third.

“It was pretty shifty out there. All the races were tough, but you have to do the best you can and keep moving on. There is plenty of space to move forward, so I just need to get on with the racing.” said Young.

Stevie Morrison and Ben Rhodes recovered from a disastrous capsize in Tuesday’s final race to remain in medal contention with ten races left after finishing in fourth and second in their two races today.

“The main thing that went well today is that we forgot about yesterday and kept calm and carried on.” said Rhodes. “Yesterday we made a mistake and today we didn’t. We’ve got a good foothold into the regatta now.”

In the men’s RS:X, Nick Dempsey cut the lead of Holland’s Dorian Van Rijsselberge to 12 points with six races remaining following a strong day with finishes of fifth and first in his two races.

“It was looking difficult today on that course. It’s strange – I’ve been sailing well but the results weren’t coming.” said Dempsey.

Elsewhere, Dempsey’s female counterpart Bryony Shaw also had a reassuring day, finishing fourth and ninth to leave her sixth in the standings after four races.