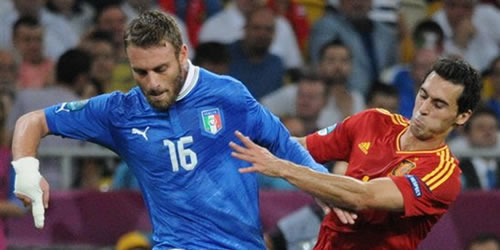 Roberto Mancini is said to be a keen admirer of Daniele De Rossi (left) Photo: Football.ua, via Wikimedia

Manchester City transfer target Daniele De Rossi is valued at over €100m (£78m) by Roma, according to the club’s director of football.

Roberto Mancini is believed to be a keen admirer of the Italy international and the Eastlands outfit have been heavily linked with a move for the midfielder this summer.

However, Walter Sabatini insisted Roma are not looking to cash in on their talisman, and it would take a “crazy offer” to tempt the Serie A outfit into selling De Rossi.

“I didn’t say De Rossi was for sale,” said Sabatini. “De Rossi is a leader for us and therefore we never considered selling De Rossi, naturally.

“I merely pointed out that in all of football, not just De Rossi or our particular situation, when a crazy offer comes in then we will listen and evaluate.

“But we are not looking for anyone to buy De Rossi, because he is extraordinarily important for us, a player who is irreplaceable and so it would be difficult to even look at an ‘indecent proposal.'”

In July, Napoli president Aurelio De Laurentiis said Edinson Cavani would not leave the club for anything less than €100m (£78m), while Fiorentina have placed a €30m (£23.5m) price tag on Stevan Jovetić.

And when Sabataini was asked what he considered to be a “crazy offer”, the Roma chief referenced the price tags placed on both Cavani and Jovetić in his response.

“The figure for De Rossi is higher than these you just named,” he added.