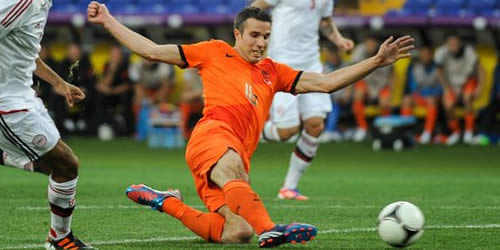 Van Persie signed a four-year deal with the Red Devils on Friday after completing a £24m switch from Arsenal to add to an already potent attacking line-up at Old Trafford.

The 29-year-old Dutchman joins the likes of Welbeck, Hernández and Rooney in Manchester and midfielder Giggs is sure United’s younger forwards can improve as a result of playing with the former Arsenal captain.

“They’re young lads and good lads [Welbeck and Hernandez] who want to learn,” Giggs told United’s website. “They’ve already learnt a lot from Wayne and you’ve seen the improvement from both players.

“Any player looks at the older lads who play in their position and what you can take from them and improve upon by watching them, and there’s no doubt Danny and Chicha will learn plenty from Robin.”

Giggs was gushing with praise for United’s latest recruit and admits Van Persie’s arrival has given he and his team-mates a “lift” ahead of their Premier League opener against Everton on Monday.

“His movement is so good and he’s got a real presence,” he continued. “He’s big and strong with a great left foot and he scores all types of goals – poacher-type goals, goals from long distance, free-kicks, penalties – he’s just an all-round top player.

“And he’s improved so much over the last few years as we’ve seen by his performances and his goals.

“You can see just from one training session the qualities he has which we know all about anyway because of all the times we’ve played against him.

“He brought that lift to training that a top player brings and that all bodes well.”

Arsenal’s Wenger admits frustration at losing players at their peak