Man United would be unstoppable with Kaká! Twitter reacts to loan reports

Manchester United have reportedly been offered Kaká on a loan deal, with the club's fans reacting with excitement on Twitter 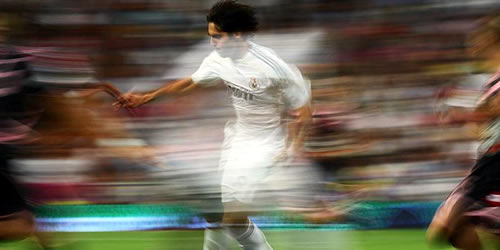 The 30-year-old is currently out-of-favour at Madrid and many Red Devils supporters urged Sir Alex Ferguson to bring the former world player of the year to Old Trafford on Twitter following the reports.

Sharjeel Khan (‏@Robot_Khan) is salivating at the possibility of another huge signing at Old Trafford: “Looks like Real Madrid are trying to loan Kaká to Manchester United!! First Robin van Persie and now Kaká!! What amazing signings!!”

United fan Martin Luke Brown (‏@BrownishMusic) questions the detractors: “Why is everyone being so negative about Kaká? It worked with Henrik Larsson!”

Chelsea supporter Uzzymatic (‏@OnlineUzzy) believes United can win the Premier League, and possibly the Champions League, with Kaká on board: “Manchester United & RVP tonight, and I won’t lie, if the Red Devils get Kaká then they will win the league and/or the Champions League!”

Manchester City fan Fraser D Masson (‏@FraserMasson) is concerned: “If United get Kaká they will be unstoppable this season!”

David Dummackin ‏(@Dummackin911) reckons United would have the best midfield and attack in the league: “Kaká to United on a season-long loan… I think it would give us not only the best strength in depth up top but also in midfield in the Premier League.”

Joel Hoover (‏@JoelHoover) sees Kaká as Paul Scholes’ long-term replacement: “So Kaká to Manchester United would be a loan deal? LET’S DO IT!!! Then sign him to a deal after Scholes retires. #masterplan”

But Johnnie Simpson ‏(@Zone_MC) doesn’t see a deal going through: “#Kaká to #MUFC on loan, I can’t see it happening, but this is football…. You never know”

While Adam Edwards ‏(@adwards555) is concerned by the injury record of three of United’s key players: “For the ten minutes this season where Kaká, Tom Cleverley and Van Persie are all fit at the same time we’re going to be SICK!”

Finally, Charles Bailey (‏@CharlesLRBailey) reckons United have no need for Kaká: “But we have Cleverly, Kagawa and Rooney. Unless Kaká is getting to the age where he wants to sit back?”