Marianne Bevis looks ahead to the 2012 US Open Series, as Novak Djokovic looks to defend his Rogers Cup crown 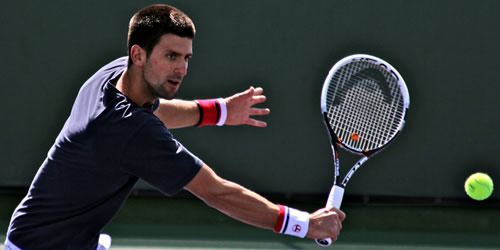 The height of 2012’s tennis summer has revelled in one of its longest and most dazzling grass seasons.

Since early June, the telescope has been firmly directed at Europe, with the focus sharpening down to London, first for Wimbledon and then for the Olympics.

For six weeks, the grass of the All England Club played host to the best that tennis has to offer—though a few brave souls headed back to mainland Europe to make the most of a brief clay swing, while some even braver players went trans-Atlantic for the start of the North American hard-court swing.

For all of them, though, these have been testing times as the French Open, extended by rain, overlapped with the grass. Then the British weather played havoc with schedules at Wimbledon, and finally the intensive nine days of Olympic competition filled the space that many normally use for some mid-season rest-and-recuperation.

So it was always going to be difficult for the first of the two back-to-back Masters that prepare the ground for the US Open to attract a full-strength draw.

The Rogers Cup, played out alternately in Montreal and in Toronto—its home this year—tried to accommodate 2012’s gruelling schedule by reducing the draw to 48. That gave all 16 seeds a bye in the first round, yet the tournament continued to see many of its star attractions leach away one by one.

World No3 Rafael Nadal, forced out of the Olympics with knee problems, was one of the first casualties—and he will not make it back for the second of the two Masters in Cincinnati either.

No1 Roger Federer, one of the two men to reach both Wimbledon finals, withdrew in favour of a short rest.

No4 Andy Murray, the other two-time finalist, won his first match but then withdrew with his own knee problem.

And No5 David Ferrer, winner of Bastad in July and s-Hertogenbosch before Wimbledon, also favoured rest over a rush to Canada—just as he did last year. Fellow Spaniards, No12 Nicolas Almagro, No19 Fernando Verdasco and No29 Feliciano Lopez, followed suit.

And as if all that was not enough of an ill Toronto wind, the semi-finalists at Wimbledon and the Olympics respectively, Jo-Wilfried Tsonga and Juan Martin del Potro—ranked No6 and No8—both lost their first matches and then raised are question marks for Cincinnati, too. Tsonga cut open his knee on a Toronto street and is certainly sidelined until the US Open. Meanwhile, del Potro said after his Toronto loss: “It’s not easy to play after a big effort in the Olympics. Now I need time to recover my body if I want to stay healthy.”

But it’s an ill wind that blows nobody any good. And for the high-ranked Nadal, Federer, Murray, Ferrer and del Potro, missing this Masters will have very few repercussions on their rankings.

For others, too, the Olympics has offered a chance to make hay while the sun shines, a chance to play tournaments without the dominating presence of the ‘big four’, a chance to get used to the hot, hard, blue courts of North America as they build towards the last Grand Slam of the year.

Sam Querrey is one of several Americans to make a surge in the post-clay season: a semi-finalist at Queen’s Club, a winner in Los Angeles, the semis in Washington and the third round this week in Toronto. Andy Roddick, too, has taken a US title, in Atlanta.

Another American missing from the Olympics—Mardy Fish’s form plunged earlier this year as he contended with a heart condition—reached the semis in Washington and the quarters in Toronto. But it was at this time last year that Fish found the finest form of his career, taking one title from three finals during the US Open Series. So his semi-final exit from Toronto will see him lose some ranking points but it will nevertheless provide an optimistic platform for a return to that 2011 form.

John Isner is the fourth American in the top 50, and the highest ranked. Since breaking the top 10 with his first Masters final at Indian Wells in April, he has had an up-and-down few months but, after a lean summer, he won his first 2012 title in Newport, reached the semis in Atlanta, the quarters at the Olympics and this week the semis in Toronto.

One of the outstanding players of the last two months, though, has been Tommy Haas, ranked outside the top 200 at the start of the year and missing out on selection for the Olympics. The 34-year-old former No2 has shown a steady and impressive return to his form of almost a decade ago, first beating Federer to take the title on Halle’s grass, then reaching the final on the clay of the Hamburg 500. Last week he did the same on the hard courts of the Washington 500.

Haas’s run has taken him back to No25 and, not content with that, he reached the quarters this week in Toronto, pushing the top seed to three sets.

And so to that top seed, the man with something to gain but also something to lose in Toronto. Novak Djokovic is world No2 to Federer’s No1 by just 165 points, and the Swiss has forfeited 90 of those points by missing Toronto. However, Djokovic is defending champion in Canada and anything short of the title will see the gap widen—though he cannot lose his No2 ranking before the seedings for the US Open are decided.

But for Djokovic, there is the added incentive of reasserting his presence before the defence of his US Open title. This time last year, he was the dominant force in men’s tennis: winner at Wimbledon, in Montreal and New York and finalist in Cincinnati—and he was world No1.

He began 2012 in a similar fashion, too: champion at the Australian Open and finalist in Monte Carlo, Rome and at the French Open. But he has not won a title since he last played in North America, at the Miami Masters.

With his path in Toronto cleared of the other three men who have shared the Rogers Cup with him since 2004—Federer, Nadal and Murray—Djokovic looks set to win his third Canadian Open title and his 12 Masters title.

Before this week, Djokovic had played fewer tournaments than any other man in the top 20—one of the very few to resist playing between the French Open and Wimbledon. It could be a decision that gives him the some vital physical reserves and mental sharpness as the weeks crank up to the demands of the US Open—though he has finalist points to defend next week in Cincinnati, too.

First, he faces the ever-uncertain Richard Gasquet who, time and again, confounds with his ability and waywardness. The Frenchman is a prodigious talent who has beaten many of the best, but he has yet to win a Masters title. Indeed his last Masters final was at this very tournament: He lost to Federer here six years ago.

Gasquet’s run has been outstanding, too. He beat No4 seed Tomas Berdych, then No11 seed Fish and lastly No8 seed Isner—all powerful hitters happy to play on these home hard courts. But in Djokovic, Gasquet faces a man who has beaten him in both previous US Masters matches: in Miami this year and Indian Wells last year.

Surely, then, the Serb will be the first of the big guns to emerge triumphant on the road to New York.