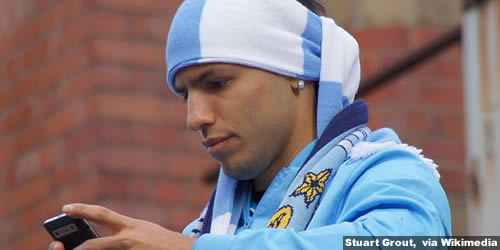 Sergio Aguero was forced off with a knee injury against Southampton

Roberto Mancini has revealed Manchester City striker Sergio Aguero should return from a knee injury in time for the Premier League champions’ trip to Stoke City on 15 September.

The 23-year-old was forced off the pitch just eight minutes into City’s 3-2 victory over Southampton after clashing with Saints defender Nathaniel Clyne.

“I don’t think Sergio will be out for long and we are hoping he will be back after the international break which is obviously fantastic news for him and for us,” said Mancini.

“It looked like a very strange injury at the time and because it was his knee, we were obviously very concerned so this news is a relief for everybody.”

The City manager also revealed Gareth Barry will return from a groin injury after the international break, but the Italian is expecting Micah Richards to take longer to return to first-team action.

“Gareth will also be ready after the international break,” added the City boss.

“He hasn’t played any games for almost four months and he needs to build his fitness up, but he is training again and I don’t see him being out for any longer than one month and hopefully, maybe just a couple of weeks.

“Micah’s injury is more serious and he could be out a little longer, but having said that, with rest and the right treatment, we are hopeful he could be ready in about one month, which again would be great news.”

Chelsea new-boy Oscar: I idolised Frank Lampard as a youngster