He was Ireland’s Giggs! Twitter reacts to Duff’s international retirement

Damien Duff announces his international retirement, prompting Republic of Ireland fans to pay tribute to the winger on Twitter 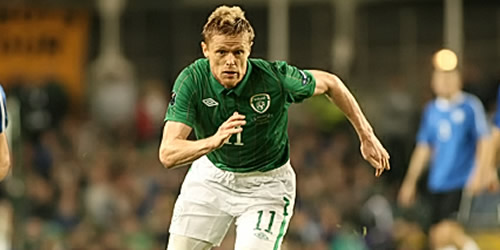 Republic of Ireland winger Damien Duff has announced his retirement from international football.

The 33-year-old scored eight goals in 108 appearances for the Men in Green, and Ireland supporters reacted with disappointment at seeing a true great call time on his international career.

Ireland and Sunderland winger James McClean ‏(@JMcC_23) pays credit to his idol: “I’m sad to see Damien Duff retire from international football, he was my idol growing up and to get to play with him was a huge honour! #legendduffer”

COYBIG (‏@COYBIG) hails a great Irish player: “So Damien Duff has joined Shay Given in retiring from international football. Great servant for us throughout the years. #COYBIG”

And Gary ‏(@555BarcaBoy555) considers Duff to be one of the greatest footballers Ireland has produced: “Sad day as Damien Duff has retired from international football! One of the greatest players to wear an Irish jersey. @FAIreland”

Irishkop1892 (‏@Irishkop1892) says thanks: “Damien Duff has retired from international football for the Republic Of Ireland. He was a fantastic player for Ireland. Thanks Damo! #Duff”

Kevin McKenna ‏(@kmckenna72) has a dig at former Ireland captain Roy Keane: “Thanks for giving your all Mr Damien Duff, loyal Irish servant. Have a piece of that Roy Keane you k**b!”

Oliver Walker (‏@locke24) reckons Duff was Ireland’s Ryan Giggs: “If the rumours are true then the best of luck to Damien Duff….he was our Ryan Giggs on the wing #thanksforthememories #Ireland”

Micheál (‏@Finical) is sad to see two greats go within a short period of time: “Sad to see Damien Duff join Shay Given retiring for Ireland. Both legends the two of them.”

Finally, Alan Cawley (‏@alancaw) heaps praise on a great player: “Damien Duff top professional and most of all a top person. We were very lucky to have him!!! #irishlegend”