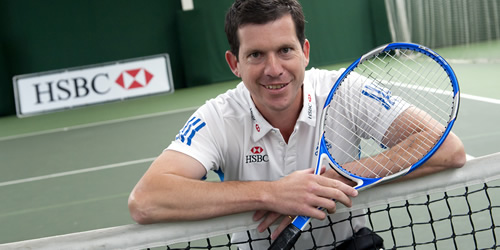 The talk and the toast of London town in the summer of 2012, in one particular corner of the Olympic capital, will always be remembered as Andy Murray.

On the first Sunday of July, he reduced Wimbledon to tears when he became the first British man since 1938 to reach the Championships final.

On the first Sunday of August, he returned to ride that wave of support all the way to Olympic gold, and the tears—his and a nation’s—flowed again.

Now the man usurped by Murray in SW19—Henman’s Hill has forever become Murray’s Mount—believes that the Scot is one of the favourites for the final Grand Slam of 2012, the US Open.

Tim Henman took time out from his role as ambassador for the HSBC Road to Wimbledon programme, on the hottest weekend of the year, to talk of Murray, his rivals and the impact of winning the Olympics on the world No4.

“New York is definitely a very good surface for Andy,” he says. “It’s where he made his first Grand Slam final and I think, upon reflection, when he met [Roger] Federer in the Wimbledon final, it was probably one of the most intense and high profile matches he had ever played.

“So I think for him to win his first Slam, it might be better to do it elsewhere—away from Wimbledon—and there would be no better place than New York this year.”

After the Olympics, though, Murray quickly headed across the Atlantic to play in the back-to-back Masters that prelude the US Open.

The Rogers Cup in Canada and the Cincinnati Masters have been happy hunting grounds for Murray, but the fatigue of his packed summer weighed heavy in both tournaments this year, and he lost in the early rounds. Murray himself was not too concerned—and with some justification, according to Henman.

“I think the week after the Olympics was going to be difficult, but he’s going to have time now to relax and recharge the batteries both mentally and physically, and I think the US Open is one of his favourite tournaments, so he’ll be ready and raring to go.

“I think when you reflect on what happened to [Novak] Djokovic 18 months ago, when he won the Davis Cup at home, that was a really big breakthrough moment.

“He then went on a complete tear and put together probably one of the best nine months of tennis anyone has ever seen. Hopefully this will be the big breakthrough moment for Murray—to win Olympic gold at home against Federer on Centre Court, I think that will be a big stepping stone in his career.”

The success of Murray, though, throws into relief the chasm between him and the next ranked Briton—barely in the top 200—and between GB and many other countries. Both Spain and France have three men in the top 20, seven in the top 50, and even countries relatively new to the tennis map are thriving: Serbia has two top-10 men.

It’s a problem that the HSBC Road to Wimbledon scheme is trying to address, though Henman was quick to point out that this ambitious tournament is more about enthusing youngsters to take up the sport than to find ‘another Murray’.

“The HSBC Road to Wimbledon is getting so many kids involved in the game—I mean we’re talking about 20,000 kids starting at the beginning of the year.

“But I don’t necessarily think this is about producing a Wimbledon champion, it’s really about getting more kids involved in the game. Schools and local clubs are so important. Already in the last five years, you can see how the standard has improved. There are some really good little players out there.”

The London 2012 mission to ‘Inspire and Generation’ has, of course, been a hot topic in the aftermath of the Olympics, and these are sentiments that have underpinned the HSBC Road to Wimbledon scheme since it began a decade ago.

Youngsters of all standards first compete at local schools and clubs, progress to county finals, and then the winners take part in the national competition on the All England Club grass in draws of 32 boys and 32 girls.

“We’ve got a lot of momentum at the moment and have to be sure we keep it going. I think also, in some respects, after the Olympics, it’s going to be even harder because so many kids are going to be trying so many sports and we have to make sure tennis is accessible.

“Whether it’s in schools or clubs, they’re going to have a chance to play the game, and realise this is a game for life, a healthy lifestyle. It’s an important stage right now.”

Henman, winner of 11 ATP titles from 23 finals, has been involved in the scheme since he retired from the professional tour in 2007.

But before retirement, he came within a hair’s breadth of beating Murray to a Wimbledon final in 2001, his fourth semi at the All England Club, and like Murray, he found success in the North American Masters—twice a finalist at Indian Wells and once at Cincinnati.

He won his first Masters shield in Paris in 2003 in a career that had begun, in another echo of Murray, with an Olympic doubles silver medal in 1996.

This year’s Olympics, played at the most traditional tennis venue in the world, begged another question. Perhaps the razzmatazz of music, colour and Mexican waves that resounded around SW19 is a route that Wimbledon and Britain’s other grass tournaments should consider.

“I know what you mean… I thought it was great to see that Olympic tennis had its own identity, great to see coloured clothing on the courts, the different coloured canvas, and obviously a very different crowd. And with Andy winning, I don’t think the event could have been a bigger success.

“You’ve got to encourage the next generation to play the game, and you want it to be fun, but from the Championships’ point of view, it’s the biggest and best tournament in the world and I don’t think that needs too many changes. But if we can, we can look at the bigger picture and the grass roots, and get more kids playing the game is the priority.”

And Henman is putting his words into action. As well as supporting the six-month process that whittles 20,000 under-14s down to just 64, he brought last year’s winners to the 2012 Championships for a coaching clinic. He was joined by Oliver Golding, who became the first Road to Wimbledon competitor to play in Wimbledon’s main draw this year.

It is the likes of Golding—winner of the US Open junior title last year—and Liam Broady—the runner-up junior at last year’s Wimbledon—who will hope to follow Laura Robson and Heather Watson into the top 100.

And Henman is upbeat about their prospects. “I’m optimistic about the group of 17 to 19 year olds, with Oli Golding, Kyle Edmund, Luke Bambridge, Liam Broady, George Morgan. They’re a good group of guys who have good games, are working hard, they’re in the right environment, and there’s healthy competition. I think that’s important—to be able to push each other higher and higher in the rankings.”

Perhaps, a few years down the road, the 2012 HSBC Road to Wimbledon champions Luke Hammond and Emily Arbuthnott will be following in the footsteps of Golding and Broady, Laura Robson and Heather Watson.

For now, though, British eyes will turn to New York and Murray. And, just for the record, who does Henman think will be his big threats?

“I think [Juan Martin] del Potro probably, [Jo-Wilfried] Tsonga and [Tomas] Berdych maybe. I think those are dangerous players, they’ve got a big enough game to cause upsets. But I’d be surprised if the winner came outside Federer, Djokovic and Murray.”