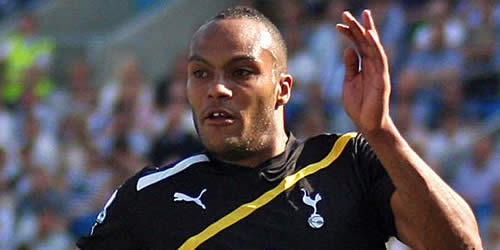 Younes Kaboul insists he is happy at Tottenham Hotspur despite the north London club missing out on Champions League football this season.

Kaboul made 27 appearances for Spurs last term as the France defender deputised for injury-plagued Ledley King and Michael Dawson at White Hart Lane.

Harry Redknapp brought Kaboul back to Spurs in January 2010 after originally persuading the defender to move to Portsmouth when the former Tottenham manager was still in charge at Fratton Park.

Andre Villas-Boas replaced Redknapp in June, but Kaboul dismissed speculation suggesting the centre-half was keen to quit the club, reiterating his desire to honour his contract at Spurs, which has four years left to run.

“Could missing out on the Champions League see me move? It would be very difficult for me to do so,” Kaboul, 26, told L’Equipe.

“I have four years remaining on my contract at Tottenham and, more importantly, I am happy here, and in England.

“There is a new challenge here and a new coach who has been working very well.

“He has his views on how he wants us to play and considering the players we have here, I am sure it will work.”

Kaboul also revealed he has spoken to his compatriot Hugo Lloris about the possibility of the France captain moving to Tottenham as a long-term replacement for veteran American goalkeeper Brad Friedel.

“I have had a phone call with Hugo Lloris. We talked about Tottenham,” he added.

“He will make his choice. He deserves to be playing in a great league.”