US Open 2012: Laura Robson is set to face one of tennis’s favourite daughters in Kim Clijsters in round two 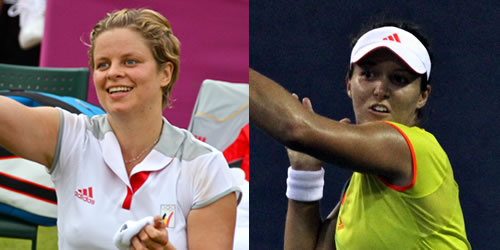 Kim Clijsters and Laura Robson face each other in round two in New York Photo: Marianne Bevis

Laura Robson has a mountain of a task ahead of her, and not just the test of her tennis.

For in winning her first match at the US Open—the first time she has been in the main draw in New York by right—the 18-year-old Briton will now face one of tennis’s favourite daughters, Kim Clijsters.

Robson has enjoyed real success here before, though. Last year, her first time at Flushing Meadows, she won through her three qualifying rounds and went on to reach the second round. Back then, she was ranked 173 in the world: Now she is 89 with an Olympic silver medal, won in the doubles with Andy Murray, in her back pocket.

She was drawn, in her opener, against fellow teenager, American Samantha Crawford, who proved to be a Robson in the making: tall, powerful and very determined.

Robson broke early in the match, Crawford levelled, but the British left-hander kept up the pressure to break again and served out 6-3.

The match began to take on the tone of carnival—Robson has garnered a considerable following that, on this occasion, chanted their support in clown costume—and it seemed, by turn, to distract and to fire up both women. Through long baseline exchanges, there were winners and errors, break and counter-break. Crawford led at first, 3-0, but with the gap closed by Robson, they had to decide the set in tie-breaker.

Again, it was the American who took the early lead, and then had set point courtesy of a double fault from Robson. But a fluked, cloud-skimming return of serve from the Briton kept her in the next point and she went on to serve out the match, 8-6.

Meanwhile, the queen of the night Clijsters, dressed the part in silver-star-studded black, was seeing off another American teenager on Arthur Ashe. And the title ‘queen’ is not overstated.

Clijsters has reached the final of her last four US Opens, winning the title in the last three: 2005, 2009 and 2010, plus the final in 2003. So her win over Victoria Duval on opening night took her to 21 straight victories here, and the best winning percentage of any female player, 24 wins to three losses.

So, yes, the tennis task for Robson is formidable. But there is also a very emotional element to Clijsters’ presence this year.

The story of her comeback is, of course, close to fairytale proportions. In 2007, she suddenly walked away, while world No4, from what was shaping up to be a highly successful season. A couple of months later she was married, and within a year she had a daughter.

Then, still only 26, she delighted a Wimbledon crowd by taking to Centre Court opposite Steffi Graf to celebrate the completion of its new roof in 2009.

It was clear from her appearance and her game that she was in very fine fettle and, sure enough, she made her professional comeback a couple of months later to the hard courts of north America.

The rest, as they say, is history. She won the third tournament she played, the US Open, beating both Williams sisters on the way, and became the first wild card ever to win a Slam.

The next year, she broke back into the top five, won four more titles—including Miami, Cincinnati and the US Open—despite missing Roland Garros and later Beijing with injury.

And it continued. She started 2011 with the Australian Open title and returned to No1 in February—the first mother to take the top ranking. But again, injury marred her year. She played only three events in the last seven months, suffering variously from shoulder, ankle and wrist problems, and 2012 brought more of the same.

And so, it transpired, the writing was on the wall. The announcement came that Clijsters, with just six tournaments on the board, would retire at the US Open, and this time, she is adamant that there is no going back, despite being presented with various scenarios that might change her mind.

If she became US Champion? “No.”

Could you still play doubles? “No, I don’t think so.”

So why, I asked, was now the right time—and she touched her heart: “Here. You feel it when it’s right.”

And so Robson, when she takes to court for her second-round match, she will face more than just one of the best hard-court games out there. She will face the sentimental favourite in the draw, and could become the one to bring down the curtain on the career of one of New York’s most memorable characters.

Nevertheless, Robson relishes the prospect: “It should be amazing. She’s playing really well at the moment. She’s definitely one of the nicest women on the tour and I get on with her.

“Hopefully it will be a night match. Playing against Clijsters at the US Open, I’ve got nothing to lose and I’m just going to try to play as well as I can.”

Should the British woman pull off what would, in reality, be an upset, two things are certain.

First, Robson will celebrate the biggest win of her career so far, and go deeper in a Grand Slam than ever before.

But second, there will not be a dry eye in the house when Kim finally leaves her biggest stage.