Novak Djokovic and Petra Kvitova have the chance to add $1m (£630,000) to their prize money if they win the US titles this year 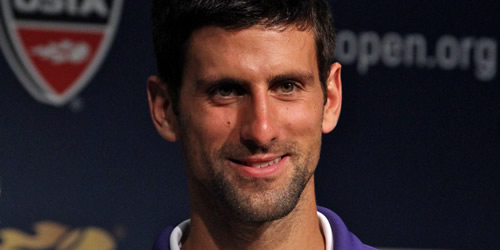 The Billie Jean King National Tennis Centre is a blaze of noise, colour and excitement, filled with families, children, and bands of dayglo-clad school groups.

The players are out in force, doing their bit to enthuse the youngsters, playing short-tennis, signing for the thousands who gather around the courts—in between sweating through drills and hot-and-humid practice sets with men and women they may play in earnest in a week’s time.

The US Open wears its heart on its sleeve but this is also an event that puts its money where its mouth is, and for the sixth straight year, the total prize money has risen by at least $1m to top $25.5m.

Both the men’s and women’s singles champions will win a record $1.9m, and there are increases for the lower-achieving singles players, too, with the prize money up by at least 18 percent for the first three rounds.

But two of the prime contenders for the 2012 titles now also have the chance to add a further $1m in bonus prize money.

Novak Djokovic and Petra Kvitova have topped the US Open Series Bonus Challenge for their performances through the North American hard-court season that leads to New York. Which means that, if they win the US titles, they will add $1m to their prize money.

Roger Federer holds the current record payday, having won $2.4m when he combined the 2007 US title with becoming US Open Series champion. On the women’s side the record goes to Kim Clijsters who won both titles in 2005 to take home $2.2m: She repeated the feat in 2010 as US champion and the Series runner-up.

Kvitova has been in sparkling form this summer, winning her first title of 2102 in Montreal, reaching the semis in Cincinnati and currently playing for the title in New Haven.

She fell in the first round of the US Open last year after winning her first Grand Slam at Wimbledon. But with two semi finishes and a quarterfinal in the three Slams of 2012, her North American run must boost her confidence and chances of breaking new ground in New York, a place she has never advanced beyond the fourth round.

Last year, Djokovic finished second in the Series and went on to win his first US Open title, earning a total of $2.3m. The defending champion has taken the Series trophy this time after winning in Toronto and reaching the final in Cincinnati. Indeed all his other titles this year have also come on hard courts: the Australian Open and the Miami Masters.

Djokovic spent much of a quiet day at Flushing Meadow on Friday wowing a thousand or more fans on Louis Armstrong court in his practice session and then wowing what seemed like most of them by signing autographs for upward of 20 minutes, skirting the entire court in a sea of yellow tennis balls, caps and scraps of paper.

He wowed again on Arthur Ashe Kids day, taking a role in one of tennis’s biggest jamborees, before heading to his press duties underneath the towering stadium at the heart of the USTA’s tennis centre.

Asked about New York and whether it brings out the best in him, he too wore his heart on his sleeve:
“I feel this energy, and I love playing in this tournament. Last five years I have had lots of success: Twice I played finals, semi-finals, and won eventually the title in 2011…It’s incredible and a very unique feeling to come back to New York as defending champion.

“It’s one of the most exciting cities in the world. So you definitely can feel that… It’s a lot of entertainment, a lot of fun. Interactions with people, with fans, they get into every point, they play with you, so it’s quite different from all the other tournaments.”

It could also, come final Sunday, give him the biggest reward in tennis history, a cool $2.9m. As the US Open strap-line goes: “It must be love.”